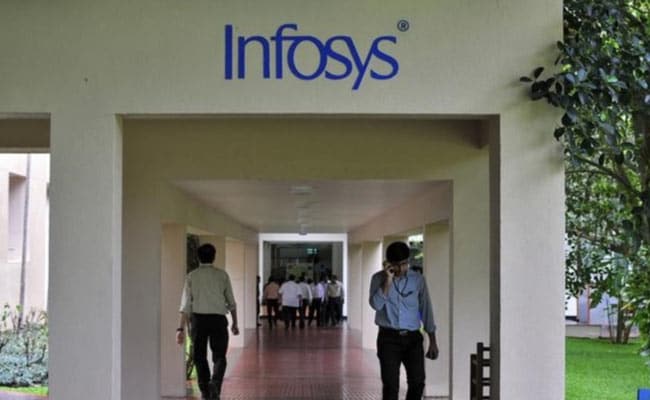 Infosys has guided for revenue growth in range of 6.5-8.5% in constant currency terms.

India's second biggest outsourcer Infosys announced its June quarter (Q1) earnings earlier in the day. The Bengaluru-based IT company's net profit came in at Rs 3,483 crore compared with Rs 3,603 crore during the previous quarter, down 3.3 per cent. The company's revenues came in at Rs 17,078 crore against Rs 17,120 crore in the March quarter. Infosys earnings came in better than the Street's estimates as analysts at Morgan Stanley had expected Infosys to report net profit of Rs 3,334 crore.

Here are the key highlights of Infosys Q1 earnings:

Really proud of our team's strong execution and great performance in Q1... @Infosys 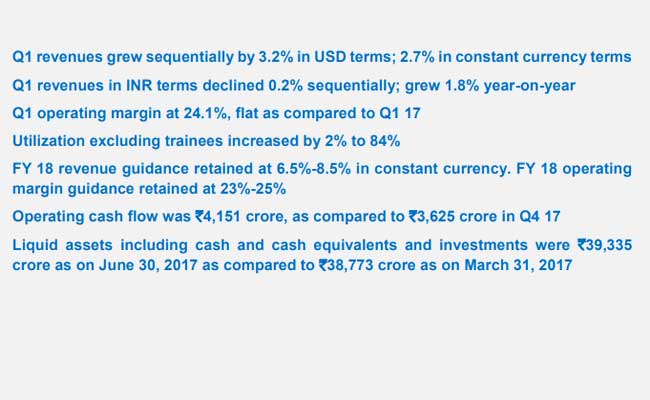 Jul 14, 2017 09:43 (IST)
The dollar revenue of Infosys, which is widely tracked by analysts and investor community, grew 3.2 per cent in reported terms and 2.7 per cent in constant currency terms sequentially to $2,651 million.
Jul 14, 2017 09:41 (IST)
"We had broad-based growth across geographical and industry segments. Our initiatives on operational discipline led to record levels of utilization and better realization during the quarter," said U B Pravin Rao, COO. "Our new services and software offerings are helping us strengthen our positioning in the market."
Jul 14, 2017 09:35 (IST)
"In Q1, we continued to help clients drive automation and innovation into the core of their businesses leveraging our renewed traditional services, our new services in areas such as Cloud Ecosystem, Big Data and Analytics, API and Micro Services, Data and Mainframe Modernization, Cyber Security and IoT  Engineering Services, and our software-led offerings, especially our next-generation Artificial Intelligence (AI) Platform Nia," Infosys said in a press release.
Jul 14, 2017 09:32 (IST)

#InfosysQ1FY18 Management commentary is expected to begin at 10:30 AM IST. Watch it live here: https://t.co/WoEjI3186b

Jul 14, 2017 07:48 (IST)
The India's second biggest outsourcer is expected to announce net profit of Rs 3,334 crore on sales of Rs 17,119.8 crore and EBITDA or operating profit is expected to come in at Rs 4,453 crore as estimated by a report published by Morgan Stanley.
Jul 14, 2017 07:47 (IST)
Besides growth guidance, here are other five things that needs to be watched in Infosys Q1 earnings, according to domestic brokerage Edelweiss Securities: 1) growth guidance and revenue growth traction of digital services; 2) management commentaries on clients budgets; 3) growth in key verticals, such as, BFSI, manufacturing, retail, healthcare, etc; 4) pace of local hiring due to expected changes in visa regime; and 5) pace of commoditisation of legacy business and impact of same on demand outlook.