Live: G20 Summit Comes To A Close In China

The stakes are high for China to pull off a trouble-free summit, its highest profile event of the year, as it looks to cement its standing as a global power and avoid acrimony over issues like the South China Sea territorial dispute. Prime Minister Narendra Modi today flew into this Chinese city for the crucial G20 summit and talks with top world leaders, including one with Chinese President Xi Jinping on irritants in bilateral ties like India's Nuclear Suppliers Group or NSG bid and the China-Pakistan Economic Corridor, which runs through PoK.
Sep 05, 2016 18:30 (IST)

Its curtains down on another Summit for this critical global forum. PM @narendramodi attends closing ceremony of G20 pic.twitter.com/8dla6DAnUq 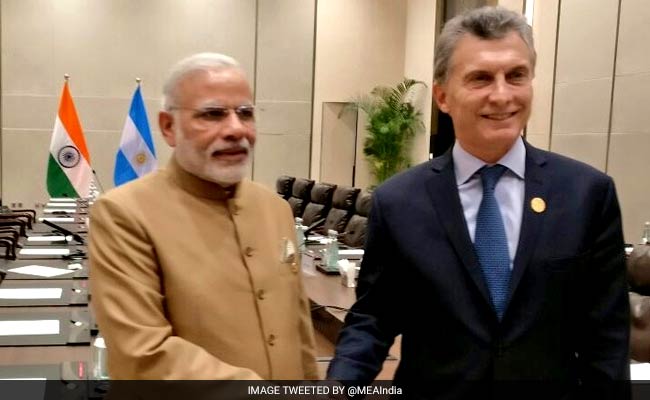 On to session 3: Robust International trade and Investment".PM begins interven'n:"Global trade is at a cross roads" pic.twitter.com/LAhcsubsKy 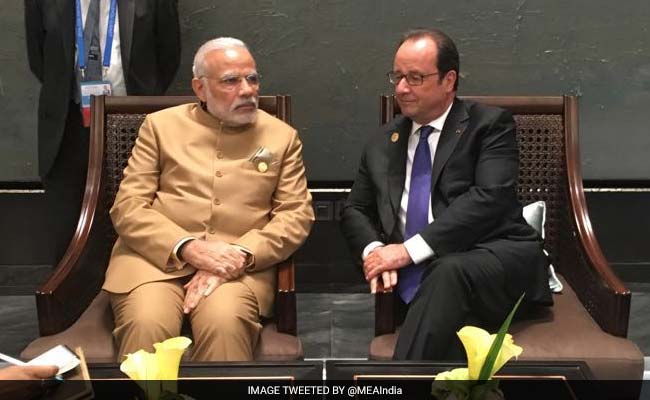 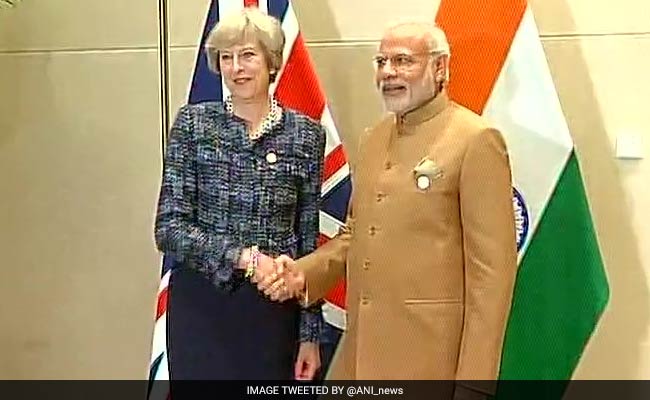 Fireworks lit up the sky above the picturesque #WestLake in #Hangzhou on Sunday, marking the opening of #G20 summit pic.twitter.com/aAWg7pGfkD

T-shirts and photo frames of G20 Summit are on display in the host city markets. 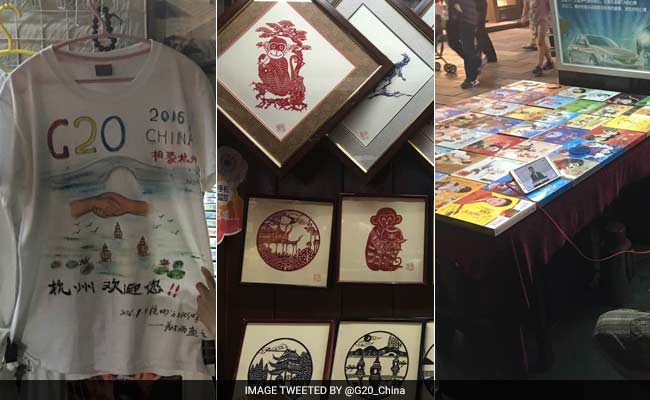 The opening gala for the #G20 summit that is performed on surface of water with #WestLake as background in #Hangzhoupic.twitter.com/7moKr7loR9

Guests attending the 11th #G20 summit have a boat trip at the #WestLake in #Hangzhou, where summit opened on Sunday pic.twitter.com/hE6yPbEmIY

This is how the G20 Host City looked likeduring the ongoing summit. 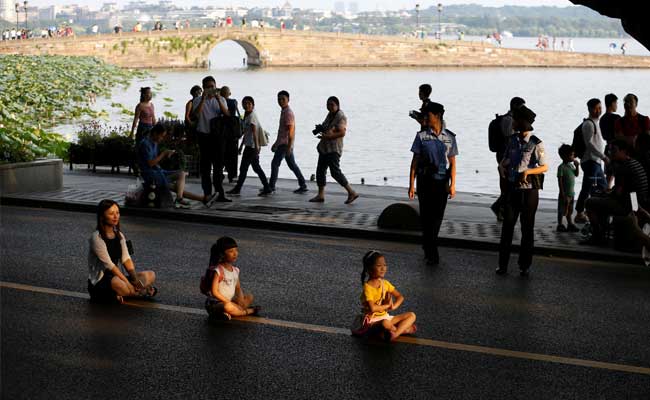 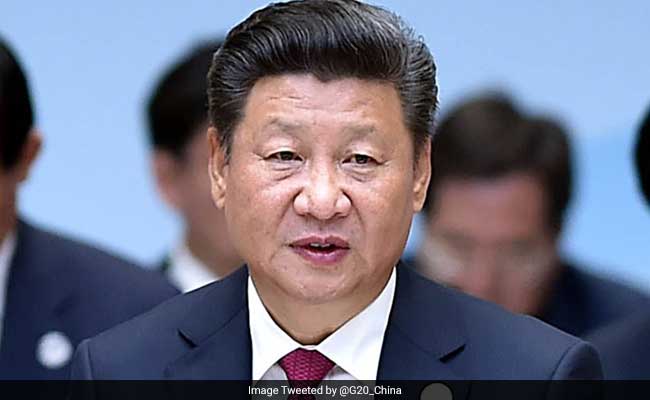 The rise of protectionism is challenging economic globalisation, imperilling multilateral trade arrangements, and despite regulatory reforms market volatility is gathering pace, he said.

"We hope the Hangzhou summit will come up with a prescription for the world economy and lead it back to the road of strong, balanced, comprehensive and sustainable growth," Xi said.
Sep 04, 2016 18:45 (IST)
Russia's Gift To China At G20: A Tub Of Ice Cream

"I promised to bring it for you. And I've brought you a whole box of ice cream," Vladimir Putin told his Chinese counterpart Xi Jinping without divulging the flavour of the frozen gift. 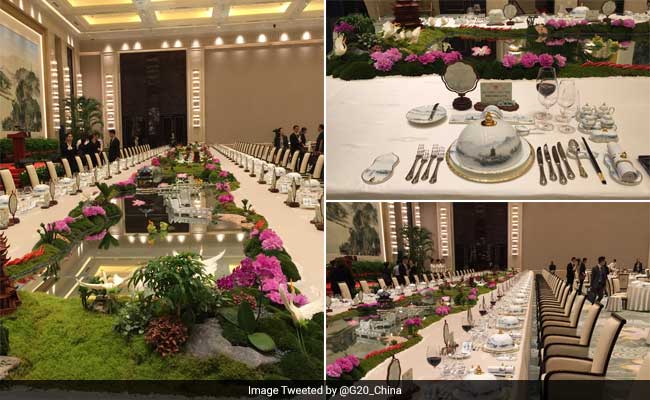 G20 leaders and their spouses pose for a group photo before their dinner banquet at the G20 Summit. 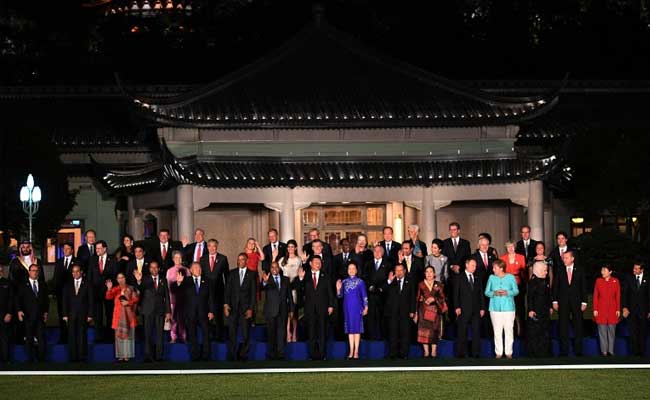 Sep 04, 2016 15:19 (IST)
At G20 Summit, PM Modi Meets Obama Over Group Photo
Prime Minister Narendra Modi today exchanged pleasantries with US President Barack Obama and other world leaders attending the G20 summit in Hangzhou.
PM Modi met Obama briefly when they were on a stage to pose for a family photograph at the venue in this eastern Chinese city.
Sep 04, 2016 14:46 (IST) 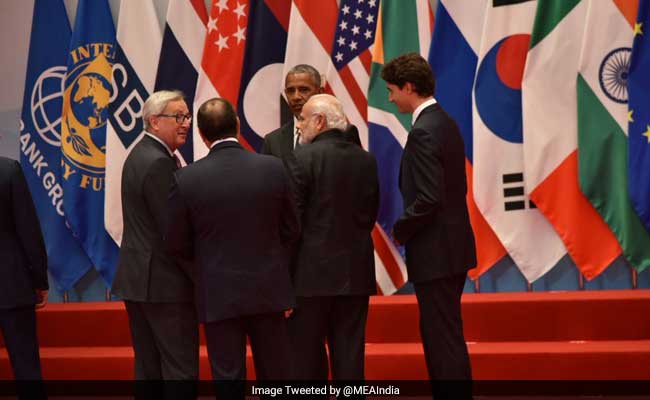 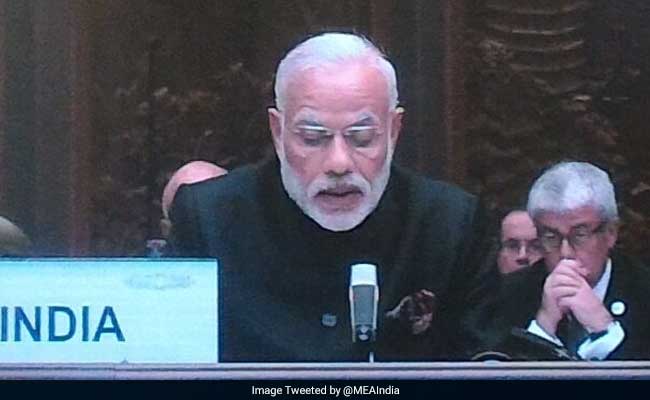 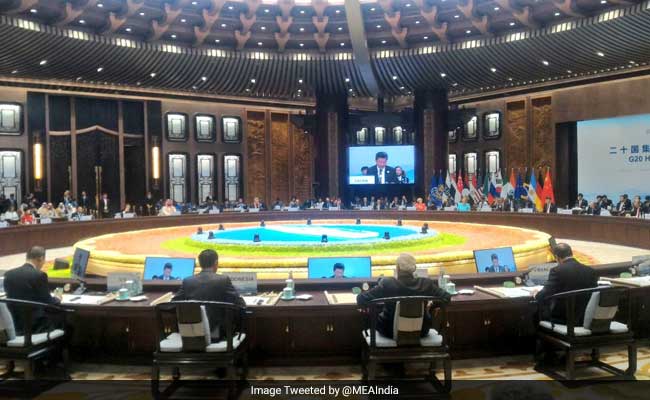 #WATCH PM Modi meets the US President Barack Obama after the group photograph at #G20summit in Hangzhou (China) pic.twitter.com/zuYRRKIEbN 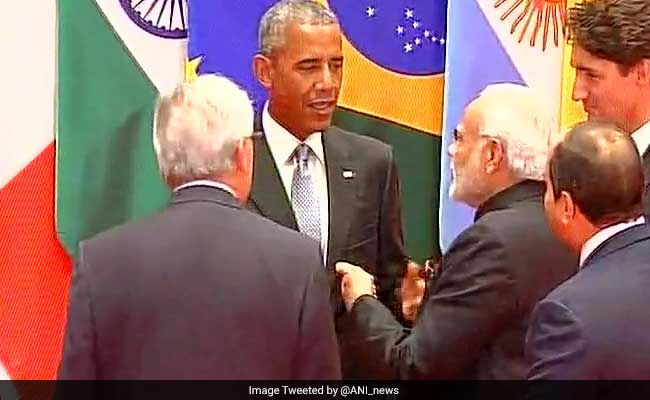 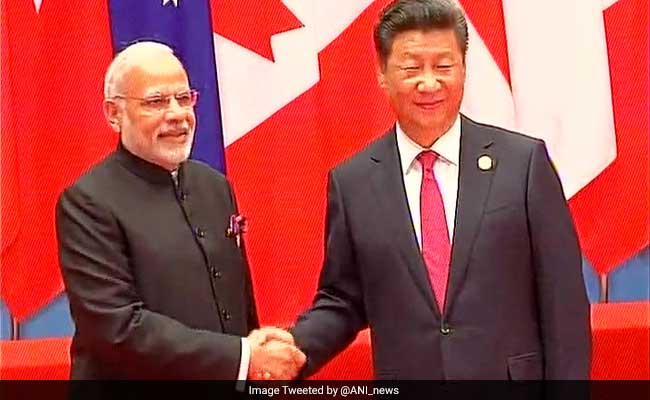 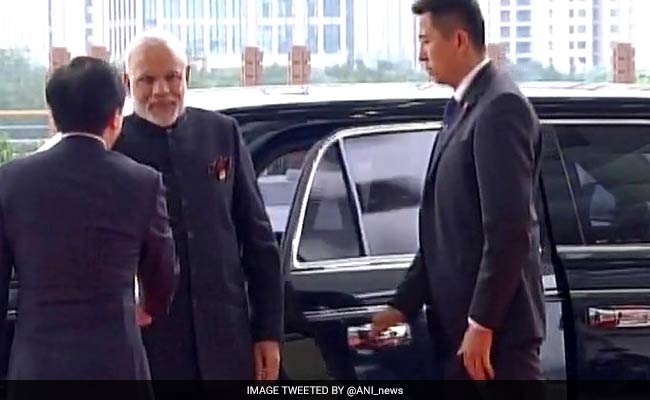 A gift to cherish! PM @narendramodi receives an oil painting of him by Prof Shen Shu pic.twitter.com/IB0gGLq8jR 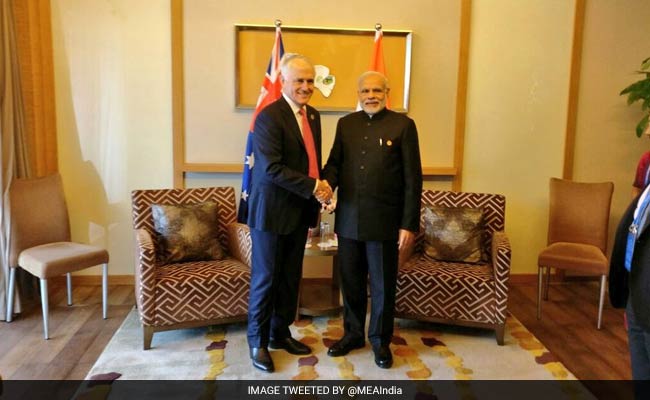 Sep 04, 2016 10:14 (IST)
BRICS 'Influential Voice' In International Discourse: PM Modi Before G20
Describing BRICS as "an influential voice in international discourse", Prime Minister Narendra Modi today said it was the grouping's shared responsibility to shape the global agenda.
Leading from the chair, Modi addressed the BRICS Leaders Meeting here, before the 8th annual Summit in Goa from October 15-16.
"We, as BRICS, are an influential voice in international discourse. It is, therefore, our shared responsibility to shape the international agenda," he said.
Sep 04, 2016 09:51 (IST)
PM Modi said that as chair of BRICS, "'Building Responsive, Inclusive and Collective Solutions' is the theme we have chosen which mirrors central priorities at G20 Summit".
Sep 04, 2016 09:30 (IST)
BRICS Leaders Meeting Ends With PM Modi Inviting All Leaders To The BRICS Summit In Goa Next Month 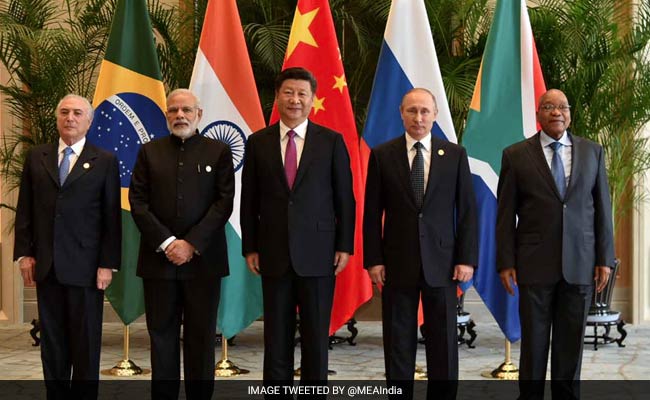 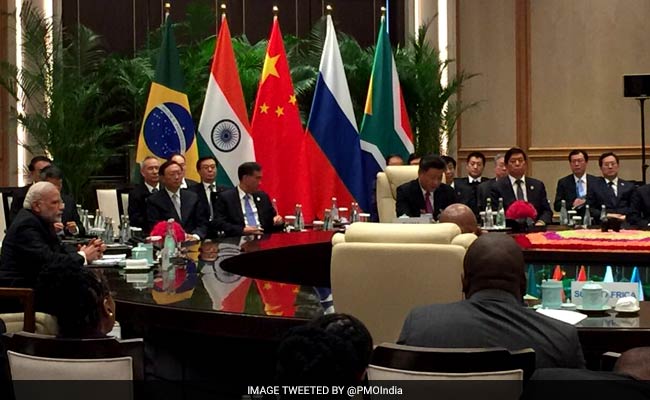 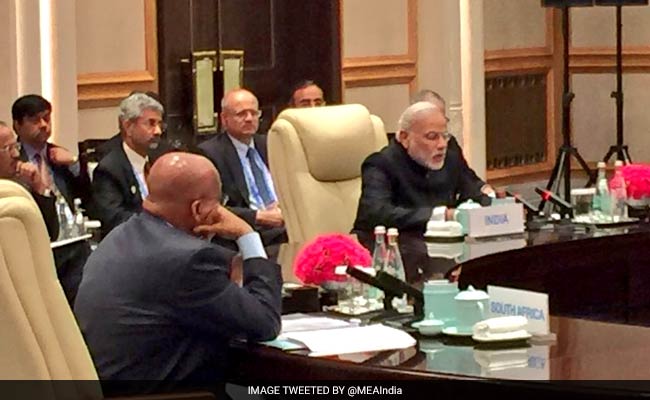 Sep 04, 2016 07:33 (IST)
The meeting between the two leaders comes in the backdrop of contentious issues including listing of Pakistan-based terrorist organisations in the UN, China stalling India's membership at the elite Nuclear Suppliers Group (NSG) and USD 46 billion China-Pakistan Economic Corridor (CPEC).
The two leaders had last met at the Shanghai Cooperation Organisation (SCO) Summit in June in Tashkent and again set to meet in Goa next month on the sidelines of BRICS summit.
After the meeting, both the leaders will attend the BRICS leaders meeting ahead of the G20 summit to finalise their strategy at the summit.
Sep 04, 2016 07:32 (IST) 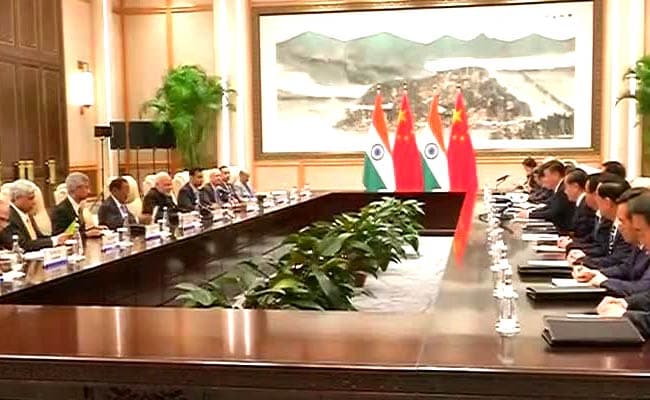 Sep 04, 2016 07:21 (IST)
PM Modi Meets Chinese President Xi Jinping Ahead Of G-20 Summit
Chinese President Xi Jinping ahead of G-20 summit amid differences between the two countries over a raft of issues, including the China-Pakistan Economic Corridor which runs through Pakistan-occupied Kashmir (PoK).
Sep 04, 2016 07:19 (IST)
PM Modi will also meet leaders of the BRICS (Brazil, Russia, India, China and South Africa) nations ahead of the G20 summit
Sep 04, 2016 07:16 (IST)
The two leaders are likely to discuss contentious issues, which will also include listing of Pakistan-based terrorist organisations in the UN and China stalling India's membership at the elite Nuclear Suppliers Group (NSG).
Sep 04, 2016 07:14 (IST)
In China, PM Modi will hold talks with Mr Xi Jinping this morning. This is their second meeting in less than three months.
Sep 04, 2016 07:07 (IST)
Prime Minister Narendra Modi lands in China for the Annual G-20 Leaders Summit