Lavasa would be India's first privately built and managed city, one of five planned for 30,000 to 50,000 people each, with a cost that would be billions of dollars. 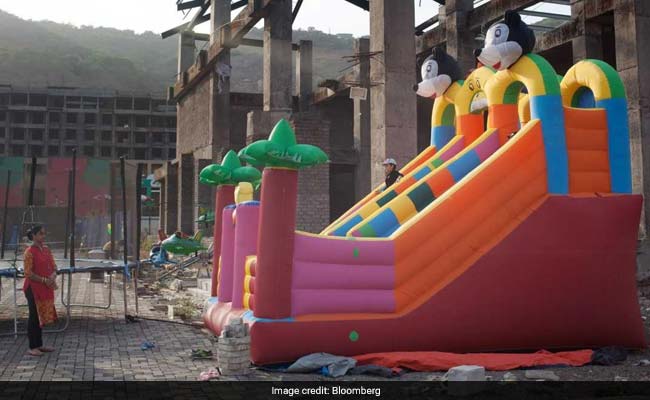 Lavasa would have been India's first privately built and managed city, with a cost of billions of dollars

This onetime hilltop paradise is becoming for some a hell on earth.

The days of zero crime are over. Garbage collection is sporadic, so litter soils the man-made lake. Storefronts are vacant. Signs of neglect are everywhere: maintenance is late or nonexistent. And that's for the construction already done. For the unfinished building works-i.e. most of it-there is little happening.

Two decades ago, then-billionaire Ajit Gulabchand envisioned something very different: a city called Lavasa, modeled on the cotton-candy harbor of Italy's Portofino, a four-hour drive from the slums and pollution that pervade so much of India's financial capital of Mumbai. To deliver that dream, he hired the architects at HOK, creators of LaGuardia's Airport Central Terminal B in New York and the Barclays world headquarters in London. Design awards and global news coverage followed.

It would be India's first privately built and managed city, one of five planned for 30,000 to 50,000 people each, soaking up settlers from the hinterlands looking for opportunities in urban areas. No more government bureaucracy. The cost would be billions of dollars. (The company declined to provide a full estimate.) 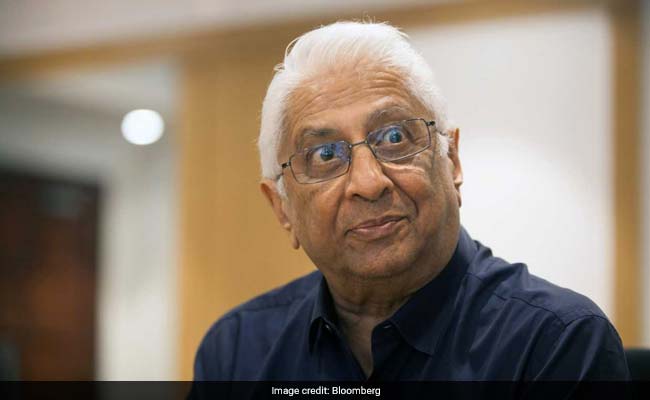 Two decades ago, then-billionaire Ajit Gulabchand envisioned something very different: a city called Lavasa, modeled on the cotton-candy harbor of Italy's Portofino, a four-hour drive from the slums and pollution that pervade so much of Mumbai (Bloomberg)

Today Lavasa is an incomplete shell housing some 10,000 people, a symbol of the excesses gripping the world's second most-populous nation. Lavasa Corporation Ltd. faces what may be its final reckoning, as India's central bank forces lenders to restructure debts quickly or take defaulters to bankruptcy court.

Arguably even worse off than current residents are the thousands of people who have put down their life savings or borrowed money to buy property here, only to fear it may never get built.

"In 2012, when we first came to this place, it was booming-from being a vibrant place it has come down to be a ghost town," said David Cooper, a 63-year-old resident of Lavasa's home for senior citizens, Aashiana. "There is hardly anyone who wants to stay."

Generally abandoned is the original plan of developing five towns with theme parks, school campuses, sports complexes and research centers in the scenic hills of the Western Ghats, a UNESCO world heritage site known for its evergreen tropical forests that shelter 325 species of vulnerable or endangered animals, birds and fauna. The first and only town to be built-Dasve-is littered with concrete skeletons.

Lavasa is a typical example of a large-scale infrastructure project gone bad, saddling its bankers with unpaid dues that are helping drive record losses at many Indian lenders. Lavasa defaulted on dues payable to bondholders and has delayed repayment to other creditors including banks, the company said in a May 3 filing. Its obligations are among the $210 billion stressed assets looming over India, which has one of the world's worst bad-loan problems. 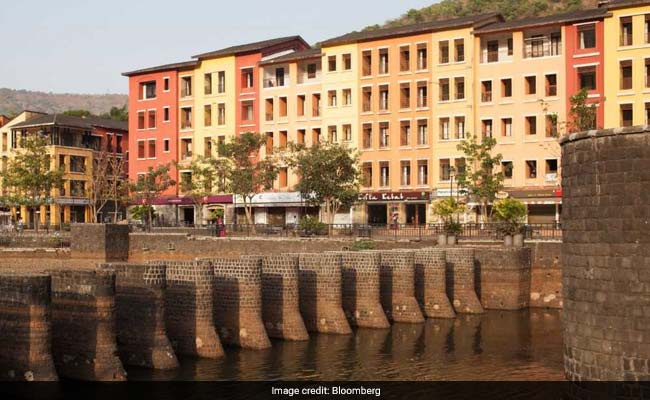 Signs of neglect are everywhere: maintenance is late or nonexistent. And that's for the construction already done. For the unfinished building works-i.e. most of it-there is little happening (Bloomberg)

Lenders as early as August may be left with no choice but to take the firm to bankruptcy court if its backers and bankers can't decide on a revival plan. The Reserve Bank of India in February scrapped various restructuring programs that had kept Lavasa on life support.

Lavasa was conceived by Gulabchand as India's first private hill city in 2000, following similar private developments in the U.S. like Seaside, Florida, or the Disney development of Celebration. Now the unit of his Hindustan Construction Ltd. is struggling to repay its 41.5 billion rupees ($610 million) of debt, leaving the township to slowly slip into disrepair. Neglect has taken the Mediterranean sheen off once-bright red and yellow buildings. The cobblestone streets and stone bridges are growing moss. Sidewalks are crumbling in places.

"We are managing the project with whatever limited resources we have," Hindustan Construction chairman Gulabchand said in an interview at the company's sprawling office complex in an eastern suburb of Mumbai. "We are now looking forward, to seek a resolution plan."

Curious tourists and locals looking for a break from city life once flocked to the streets of Dasve, but now they now look deserted. Many restaurants and coffee shops on the promenade facing the lake have shut. The number of visitors has dropped in the past two years, said Mukesh Kumar, a general manager at the Waterfront Shaw, a 43-apartment hotel.

Prakash Sahoo, a retiree who has been living in an apartment near the Dasve lake for four years, bemoans the seven years of hotel construction that's still a shell just outside his balcony. And yet, Sahoo calls Lavasa India's paradise city given its beautiful architecture, well-planned infrastructure, reliable water and power supplies, clean air and less traffic. 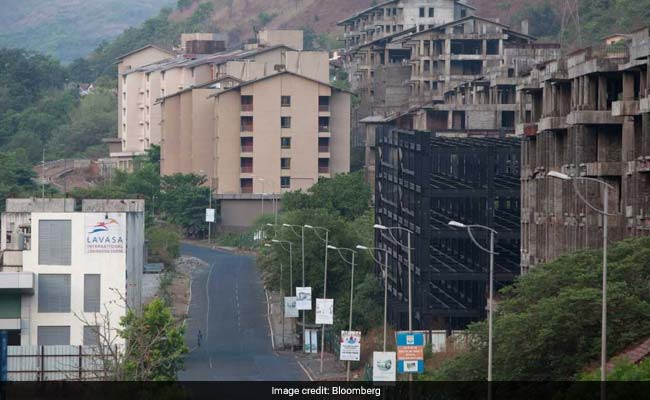 Lavasa was conceived by Ajit Gulabchand as India's first private hill city in 2000, following similar private developments in the U.S. like Seaside, Florida, or the Disney development of Celebration. Now the unit of his Hindustan Construction Ltd. is struggling to repay its 41.5 billion rupees ($610 million) of debt (Bloomberg)

Erstwhile Mumbaities, David Cooper and his wife, Zerin, are worried though about the rapidly thinning security staff and recent break-ins.

Madhav Thapar, another apartment owner, is disheartened while describing the lawlessness and deterioration gripping the hill city. What's worse, Sahoo says: The Lavasa civic body is privately managed so residents have little access to its functioning or fund management.

Plans for this retreat from modern India-including a possible IPO of the developer-came off the rails in November 2010 when the national environment and forests ministry halted construction for about a year, alleging rule violations. Its cash flow quickly dried up. Efforts to tap equity markets fell through with investors nervous of further government intervention.

About a year later, construction resumed after approvals came through to build on 21 square kilometers-almost the size of Macau. But by that point the project was cursed.

Despite getting environmental clearance, the company had lost the cooperation from government officials, Gulabchand said. Lenders balked at complexities.

The 70-year-old scion of the construction company-known for building roads, power plants, tunnels and more than 300 bridges around the country-is now in discussions with as many as three strategic investors, including private equity players and banks, to come up with a solution and is open to either a partnership, or selling his stake in the project entirely.

"I am open to all possibilities. This is the only way forward," Gulabchand said. 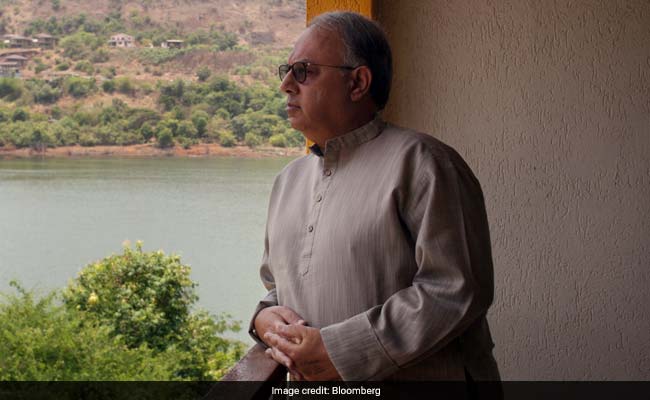 Prakash Sahoo, a retiree who has been living in an apartment near the Dasve lake for four years, bemoans the seven years of hotel construction that's still a shell just outside his balcony (Bloomberg)

Undeterred in his vision, Gulabchand stressed that whoever invests in the project will have to develop the five towns as the project was originally planned under the hill development policy. "Obviously it has to be developed," he said. "There is no escape, and the question is of the pace. It may take little longer."

It may not be easy to find the right suitor for Lavasa considering the cost involved. Reviving the project would require as much as 100 billion rupees ($1.5 billion) just to start with, Gulabchand estimates.

For a glimpse of where Lavasa may be heading, look to Aamby Valley, another affluent township outside Mumbai turned ghost town built by a separate developer. That $5.5 billion township is facing liquidation after its backer defaulted. After repeated failed attempts to auction Aamby Valley, the court ordered piecemeal sale of the project's land. But a slump in India's property market is making matters worse.

Promoted
Listen to the latest songs, only on JioSaavn.com
"Selling big land banks like Lavasa or finding investors who can write big checks for a project like that would be quite a struggle in the current environment," said Amit Goenka, managing director of Nisus Finance Services Ltd. "There are just too many distressed sellers and not enough buyers in this market."