Holi 2021: Barsana in Mathura is famous for Lathmar Holi. People participated in large numbers despite the rise in COVID-19 infections. Watch a video of Lathmar Holi in Mathura 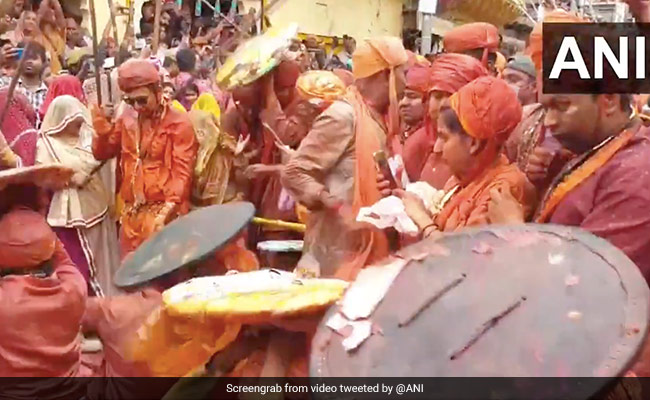 Lathmar Holi celebrations have started in Mathura and Vrindavan. Men and women participated in large numbers despite the rise in COVID-19 infections. Barsana in Mathura is famous for Lathmar Holi. In Vrindavan and Mathura, Holi festivities are not a one-day affair. It is popularly referred to as Braj Ki Holi. Braj, the land of Radha and Krishna, is famous for its Holi celebrations. Braj or Brijbhoomi refers to the area on either side of the Yamuna river with Mathura and Vrindavan as the centre.

Holi celebrations usually goes on for a week in Mathura and Vrindavan. The festivities surrounding legends and local folklore started on Tuesday and will go on till 30th March. Holi festivities also have a different name for each day like Lathmar Holi of Barsana and Nandgaon, Phoolwalon Ki Holi at Vrindavan's Bankey Bihari Temple, Gokul Holi and the Widows' Holi in Vrindavan.

Lathmar Holi: Know all about it

Lathmar Holi of Barsana is centered around the legend of Radha and Krishna. The men from Krishna's village, Nandgaon, comes to Barsana where Radha and her friends lived. Women traditionally dress up as Gopis and the men as Gops. The women playfully 'hit' the men with sticks to drive them away and also play with colours.

There are songs and dances dedicated to different kinds of Holi celebrations. The week-long celebrations culminate in Holika Dahan on March 28 and the Dhulandi Holi in Brij on March 29.

Wishing all a safe and Happy Holi in advance.