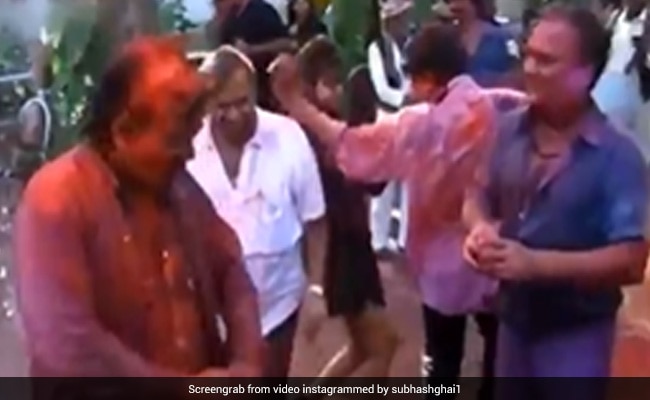 It's never too late for blasts from a golden past and what's better than chancing upon a throwback video that features actor Shah Rukh Khan and his wife, interior designer Gauri, dancing together at a holi party. A day after Holi, filmmaker Subhash Ghai treated his fans to a priceless throwback video from the Holi party that he organised at his Meghna's cottage, Madh Island, Mumbai. The clip also features actors like Madhuri Dixit, Chunky Panday and late music composer Laxmikant. In the throwback gem, a much younger version of Shah Rukh Khan can be seen sporting a white shirt while Gauri looks cool in what appears to be a brown t-shirt. In the middle of the clip, the duo can be seen dancing together like no one's watching with colors on their faces and clothes.

Sharing the video, Subhash Ghai, who worked with Shah Rukh Khan in the 1997 film Pardes, wrote: "Days of Holi in 90s. I never missed Holi so much as yesterday with my memories of celebrating Holi at my Meghna cottage mud island with friends and film folks like Shah Rukh Khan, Gauri, Chunky, Madhuri, Laxmikant and so on. Ecstasy."

Check out the amazing blast from the past here:

Shah Rukh Khan married Gauri on October 25 in 1991, a year before his Bollywood debut with 1992 film Deewana. Shah Rukh and Gauri met when they were studying in Delhi University and they got married after dating for almost six years.