Anupam Hazra, the expelled Trinamool leader who joined the BJP last year, also claimed he was attacked today -- stones were thrown at his car, he said. 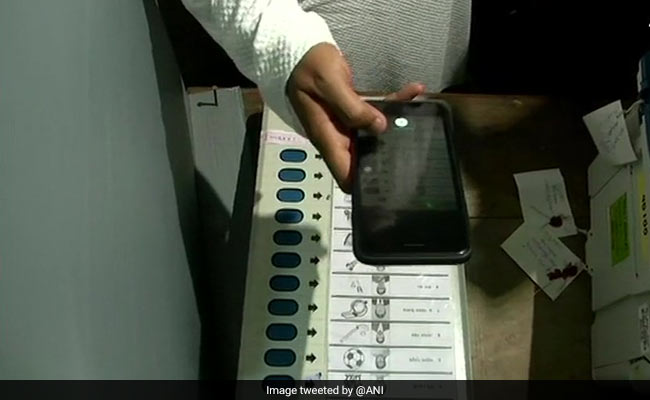 Anupam Hazra, BJP candidate from Kolkata, said a special mark was put on Trinamool symbol in the EVM.

Bengal's BJP candidate Anupam Hazra has accused the ruling Trinamool Congress of placing a special mark against its election symbol in the Electronic Voting Machine to draw the voters' eye. Mr Hazra, a candidate from Kolkata's Jadhavpur seat, was also photographed taking a cellphone shot of a voting machine - a procedure banned under the rules of the Election Commission.

The expelled Trinamool leader, who joined the BJP last year, claimed he was attacked today -- stones were thrown at his car, he said.

There was also trouble when Mr Hazra walked into a poll booth in Jadhavpur area, accompanied by a huge security and media contingent. As the booth got jammed, the voters who had been standing in queue since the hot and humid morning, started complaining. After one person suffered stroke, they got angry and agitated.

The people started abusing him and the Trinamool workers demanded that he left the booth.

Bengal saw a hugely polarised campaign this time, between an ambitious BJP out to expand its footprint and Chief Minister Mamata Banerjee unwilling to cede ground. Violence took place during every phase of the gigantic seven-phase polls, and frequently, in between too.

On Tuesday, violence took place during BJP chief Amit Shah's rally in Kolkata and a statue of Iswar Chandra Vidyasagar -- a 19th Century reformer and an iconic figure in the state - was broken. The issue dominated the last phase of the election and amid the furore, the Election Commission, in a first, cut short campaign time in the state by a day.

The last round of elections witnessed violence too. Crude bombs were thrown in Bhatpara, where by-elections are being held for the Bhatpara assembly seat. The clash came under control only after the police used batons. The Election Commission has asked for a report.

Besides Anupam Hazra, two other BJP candidates have alleged they had been attacked. Nilanjan Roy, who is the BJP contender from the Diamond Harbour seat, where Mamata Banerjee's nephew Abhishek Banerjee is the sitting lawmaker, said stones were thrown at his car was too.

Rahul Sinha, BJP candidate for the North Kolkata seat, said he was attacked by a group of men and held at a school in Park Circus as people shouted "Go Back" slogans.