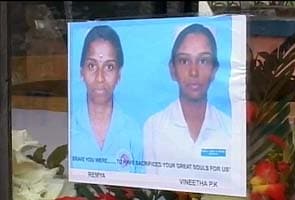 Kolkata: The devastating fire at Kolkata's AMRI Hospital early Friday morning was one of the worst tragedies to have hit the city in recent times. But in those dark hours, there were a few heroes who gave a new lease of life to many people.

Among these heroes were Remya Rajappan and Vineeta PK, two nurses from Kerala who were the nurses on night duty at the ill-fated building on that day. The fire was spreading through the ground floor, but these two chose not to run away. Instead, they rushed to the upper floors of the building and got as many as eight patients out to safety.

Both nurses died while trying to help a ninth patient escape.

Relatives are too shocked to react, but their act of bravery is a standout in a terrible tragedy that has taken more than 91 lives so far.

There were other people too in the bylanes adjacent to the hospital who risked their lives to save many people.

"The patients were crying for help. The security guards shooed us away initially, but then we could not control ourselves and so we went inside," said Sunil Jha, a young man who saved many people during the tragedy.

Kolkata is still struggling to come to terms with this terrible tragedy, but perhaps it is also important to note the contribution of those who died or risked their lives to save many others.