On a video widely circulated on social media, Mr Doval asked a young Kashmiri man the price and weight of a sheep. 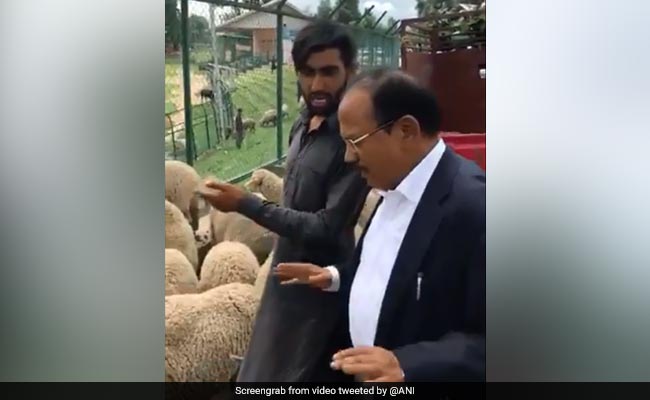 National Security Advisor Ajit Doval, who is camping in Jammu and Kashmir amid a lockdown over the centre's decision to scrap special status to the state, was on Saturday seen enquiring about sheep from a cattle trader in South Kashmir's Anantnag.

On a video widely circulated on social media, Mr Doval asked a young Kashmiri man the price and weight of a sheep.

"How much does it cost?" Mr Doval asked.

"How much does it weigh?"

The cattle trader, who didn't recognise Mr Doval, further explained that the sheep were from Ladakh's Kargil. "Do you know where Drass is?" the Kashmiri man asked him.

Before Mr Doval, a former top intelligence officer, could reply, Deputy Commissioner of Anantnag Khalid Janagir told the trader that the man he was talking to was the NSA.

A smiling Mr Doval then patted on the man's shoulder, shook his hand and left.

ANANTNAG: National Security Advisor Ajit Doval interacts with locals in Anantnag, an area which has been a hotbed of terrorist activities in the past. #JammuAndKashmirpic.twitter.com/dUd7GPvS2W

Prohibitory orders were issued in Jammu and Kashmir after the central government scrapped special status to the state which was powered by Article 370. The state was also bifurcated into two Union territories.

The visuals sought to project normalcy in Kashmir days before Islamic festival Eid al-Adha in which Muslims sacrifice cattle.

Mr Doval is meeting local officials and touring the state. Last week, he was seen sharing a meal of traditional Kashmiri Wazwan served on the streets by a handful of residents in Shopian.

On Saturday, restrictions were eased in five Jammu districts and in Doda and Kishtwar, paving the way for resumption of normal activities.