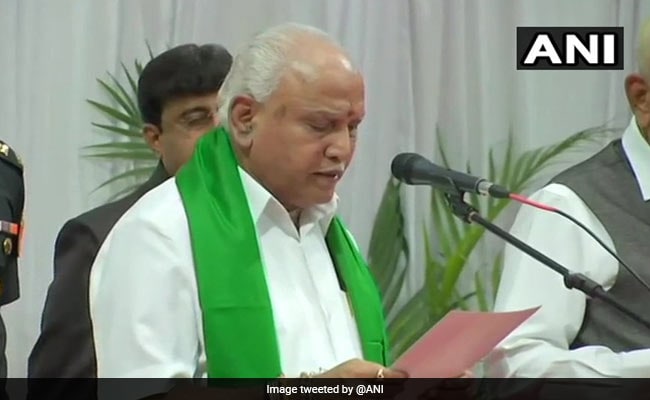 BJP leader BS Yediyurappa took oath this evening to form the government in Karnataka. Ahead of taking oath as Karnataka Chief Minister Mr Yediyurappa asserted that there would be no politics of vengeance in his rule and he would take the opposition along. In his address to BJP workers before proceeding to the Raj Bhavan for the swearing in, he said, "We have to show the difference in the administration. There will be no politics of vengeance and I will take the opposition along."

Earlier in the day, the three-time state chief minister told news agency ANI that, "I am going to meet the Governor today at 10 am to stake claim to form the government and I will request him to hold oath ceremony today itself." "It is victory of democracy. People were fed up with Kumaraswamy government. I want to assure people of Karnataka that a new era of development will start now," Mr Yediyurappa added.

The Congress-JDS coalition government headed by HD Kumaraswamy collapsed on Tuesday after losing the vote of confidence in the assembly after a three-week long intense power struggle triggered by the Karnataka lawmakers.

Here are the LIVE Updates of BS Yediyurappa swearing-in Ceremony:

Congrats to @BSYBJP ji, newly sworn in CM of Karnataka. I am sure under his leadership and under the guidance of PM Modi, BJP will give a stable, pro-farmer and development oriented govt in the State. I assure people of Karnataka that BJP is committed to fulfil their aspirations. 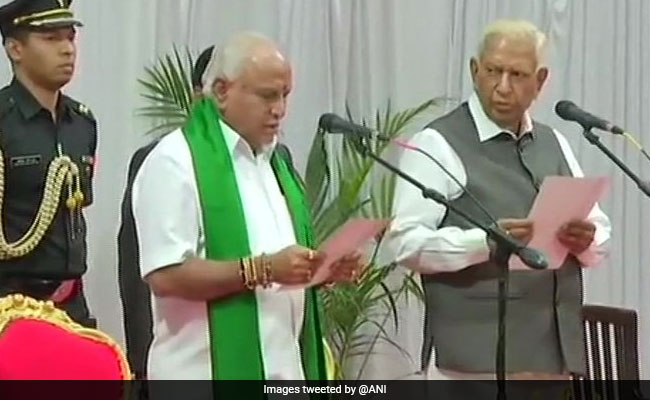 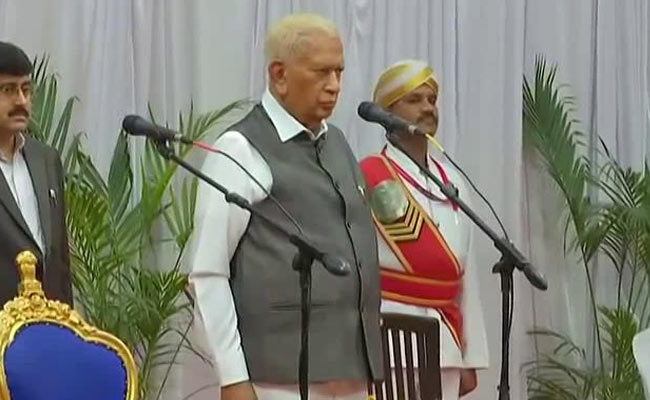 Promising to give an honest administration, BS Yediyurappa underlined the role of BJP workers.

"The role of party workers is huge. Farmers, fishermen, potters, weavers, the tribal and the downtrodden communities have huge expectations from the new government. Without your(party workers) support, I cannot live up to theirexpectations," Mr Yediyurappa said.

Ahead of taking oath as Karnataka Chief Minister BS Yediyurappa Friday asserted that there would be no politics of vengeance in his rule and he would take the opposition along.

In his address to BJP workers before proceeding to the Raj Bhavan for the swearing in, he said, "We have to show the difference in the administration. There will be no politics of vengeance and I will take the opposition along." 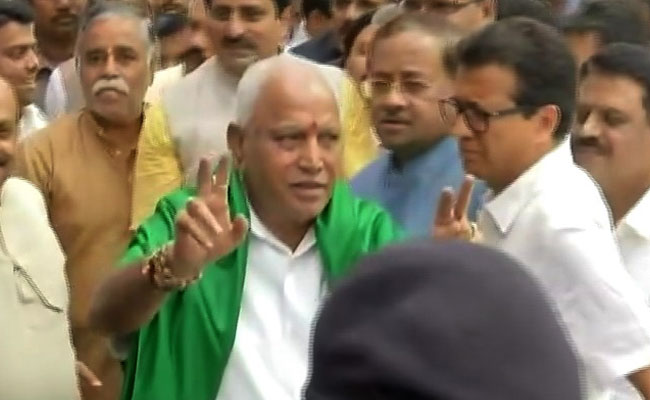 Karnataka set to witness a new era in its Vikas Yatra ... @BSYBJP will take oath as Chief Minister of Karnataka at 6 pm today .. He will addressing workers at @BJP4Karnataka State office Jagannatha Bhavana at 5 pm ... Congratukations ..

Jul 26, 2019 16:29 (IST)
Karnataka Chief Secretary TM Vijaybhaskar in a letter to Dept Secretaries says, BS Yeddyurappa has given directions suggesting all Dept Secretaries to put on hold the orders given by care taker CM (HD Kumaraswamy) in July, till they're looked into by Chief Secy or Depts Secretaries.
Jul 26, 2019 14:49 (IST)
BS Yeddyurappa to visit National Military Memorial ahead of swearing-in ceremony
Karnataka BJP chief BS Yeddyurappa on Friday will pay tributes at the National Military Memorial here ahead of taking oath as the 25th Chief Minister of the state.
"On this day 20 years ago, Indian armed forces defeated Pakistan in 1999 in the Kargil war. As a mark of respect to all soldiers who fought this great war, I have come here to pay my tribute to our armed forces before taking oath as the Chief Minister of Karnataka," Yeddyurappa told reporters before visiting the memorial.
Jul 26, 2019 12:44 (IST)

Shobha Karandlaje,Karnataka BJP MP: Today BS Yeddyurappa ji has staked claim to form Govt, party high command has supported him. Numbers in assembly are not a problem, also the rebel MLAs are firm on their stand and if they want to join BJP,we will welcome them. pic.twitter.com/DWo8UCzAld

.@BJP4Karnataka has the strength of 105 which is way less than the half way mark.

In no way BJP can form the govt if constitution is followed. This only proves that BJP has no belief in the democratic values.@INCKarnataka

In what article of the constitution is the governor allowed to permit the party to form govt that doesn't have majority?

People of Karnataka remember his disastrous tenure as CM between 2008-2011, which ended with BSY in Jail.

BJP's BS Yeddyurappa will have to prove majority in the assembly by July 31. #Karnatakahttps://t.co/FXI9PI6PF2

Jul 26, 2019 11:07 (IST)
"Let Yeddy form the govt, we wish him all the best. Let him prove numbers too.. we dont want to comment, ultimately it's the numbers and democracy. Whatever the decision taken was as per the constitution book.. there's nothing new about it. I have come Delhi for my personal trip, not meeting any party high command," Karnataka Minister DK Shivakumar said
Jul 26, 2019 11:00 (IST)

BS Yeddyurappa,BJP: I just met the Governor, I will take oath as Chief Minister today at 6 pm. #Karnatakapic.twitter.com/LkemKmqQP6 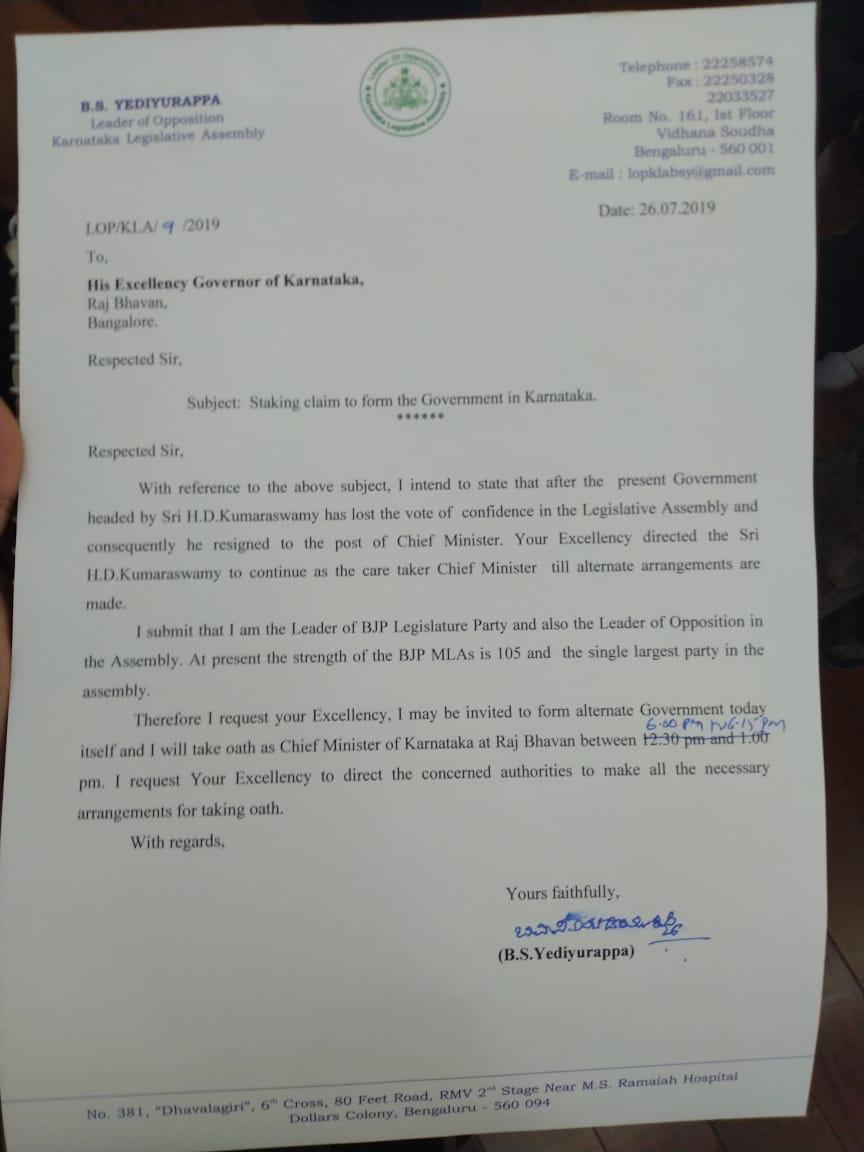