Karnataka Political Crisis: The Speaker had requested the court to end status quo on any action against the lawmakers, asserting that he would decide on their resignation or disqualification by today.

The Supreme Court today said that the Karnataka Speaker is free to decide on resignations of 15 rebel lawmakers of the ruling Congress-Janata Dal Secular coalition in Karnataka within such time-frame as deemed appropriate by him. "Discretion of Karnataka Assembly Speaker in deciding resignation should not be fettered by direction or observations of court," the top court said amid the ongoing Karnataka crisis.

As the Karnataka political crisis played out in the Supreme Court on Tuesday, Chief Minister HD Kumaraswamy said that rebel lawmakers were "hunting in pack" to destabilize his government. The rebels argued that their resignations must be accepted by the Speaker, that they could not be "forced to attend the assembly". The resignations, if accepted, will leave the government in a minority.

The Speaker had yesterday requested the court to end status quo on any action against the lawmakers, asserting that he would decide on their resignation or disqualification by today.

Here are the LIVE Updates on Karnataka Crisis: 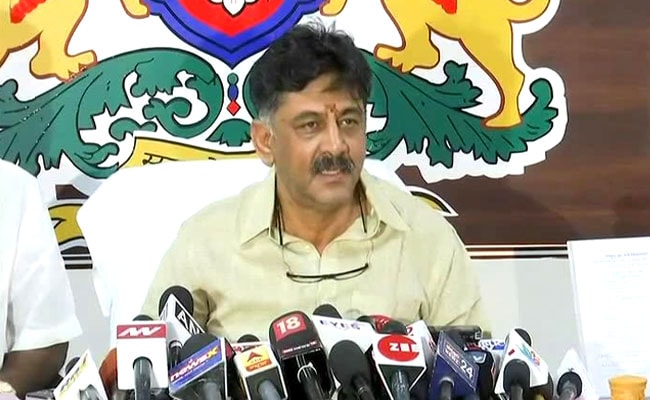 Congress' chief troubleshooter in Karnataka, DK Shivakumar on Wednesday warned the Congress-JD(S) lawmakers of disqualification proceedings against them under the anti-defection law if they did not obey the whip and participate in the proceedings during the trust vote in the Assembly on Thursday.
"Some BJP friends are trying to say that whip is not valid. But the party can issue a whip and take the necessary action as per anti-defection law," he said responding to the Supreme Court verdict that rebel lawmakers cannot be forced to attend tomorrow's Assembly session.
Jul 17, 2019 15:19 (IST)
Congress Leader Abhishek Manu Singhvi On Top Court Verdict On Karnataka Lawmakers
I wonder what victory BS Yeddyurappa is celebrating. The Supreme Court  has not given any date or deadline to the Karnataka Speaker. No whip has been issued. No date has been fixed for voting...The discussion is starting on Thursday. It will be a long debate in the assembly .
Jul 17, 2019 14:03 (IST)
Randeep Singh Surjewala Supreme Court's order sets terrible judicial precedent
Congress spokesperson Randeep Singh Surjewala, in a series of tweets, says Supreme Court's order nullifying the whip sets a "terrible judicial precedent."

1. Court can interfere with the working of the State Legislature by deciding when a Whip will be enforced?

2. Abandonment of the 'Basic Structure' doctrine of Separation of Powers?#KarnatakaPoliticalCrisispic.twitter.com/H9f7v1b3f5

"Does this mean court can interfere with the working of the State Legislature by deciding when a Whip will be enforced?" he questions.

1. Court can interfere with the working of the State Legislature by deciding when a Whip will be enforced?

2. Abandonment of the 'Basic Structure' doctrine of Separation of Powers?#KarnatakaPoliticalCrisispic.twitter.com/H9f7v1b3f5

He says it is tragic that the court did not appreciate the context and designed history of defections to subvert democratic mandates by PM Modi government over the last 5 years.

SC should recall own judgement of May 2016 striking down the illegal attempt of BJP in Uttarakhand to form govthttps://t.co/h52LIkt5bJ

Jul 17, 2019 13:14 (IST)
Judgement gave strength to democratic process: Congress leader
Congress leader DK Shivakumar says: "This landmark judgement has given strength to democratic process. Some BJP friends are trying to misguide that whip is not valid but the party can issue a whip and take necessary action as per anti-defection law."
Jul 17, 2019 12:03 (IST)
Top Court should create timeline for Speakers in future: GVL Narasimha Rao
BJP leader GVL Narasimha Rao says the Supreme Court in its final judgement will have to create timelines for Speakers to decide a matter be it Assembly or Parliament. "If required we'll look at need for amending the act so that Speakers can't go by their own whims and fancies."
Jul 17, 2019 11:53 (IST)
HD Kumaraswamy declines to comment
Karnataka chief minister HD Kumaraswamy declines to comment, when asked about Supreme Court's verdict on Karnataka rebel lawmakers.
Jul 17, 2019 11:21 (IST)
Full discussion on matter to be held in court later: Mukul Rohatgi
Mukul Rohatgi, senior advocate representing Karnataka rebel lawmakers in Supreme Court, says: "The Court has said that the matter will be fully thrashed out at a later date."
Jul 17, 2019 11:15 (IST)
Karnataka Speaker KR Ramesh Kumar says: "I will take a decision that in no way will go contrary to the Constitution, the Court and the Lokpal."
Jul 17, 2019 11:15 (IST)
Kumaraswamy must resign: BS Yeddyurappa
BJP President BS Yeddyurappa says Karnataka chief minister HD Kumaraswamy must resign tomorrow. "He has lost his mandate. Certainly, the government will not last because they do not have the numbers."
"I welcome the Supreme Court's decision, it is a victory of the Constitution and democracy... It is a moral victory for the rebel lawmakers. It was only an interim order. In the future, the court will decide the power of the Speaker which will set a new trend in the parliamentary democracy."
"I have respect for the Speaker. According to Supreme Court's direction, he will act... Let us wait and see," he says.
Jul 17, 2019 11:06 (IST)
BJP leader Jagadish Shettar says: "There is anarchy in the state because of HD Kumaraswamy, he should resign immediately after this verdict and not wait for the trust vote."
Jul 17, 2019 11:06 (IST)
Karnataka Speaker Welcomes Decision
Karnataka Speaker KR Ramesh Kumar says he welcomes this decision. I will try to live up to the confidence of the Supreme Court put in me, he adds.
"I hold the judiciary in high esteem. The court has increased my responsibilities," he says.
Jul 17, 2019 11:04 (IST)
Chief Minister of Karnataka HD Kumaraswamy offers prayers at Sri Sringeri Shankara Mutt in Shankarapuram. 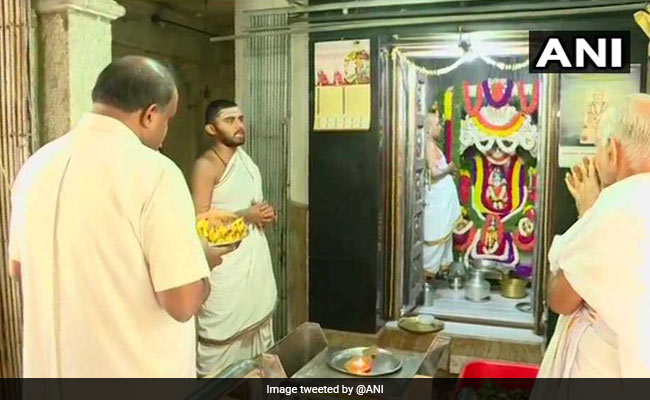 Jul 17, 2019 10:51 (IST)
Supreme Court verdict on Karnataka Crisis
The Supreme Court says that the discretion of Karnataka Assembly Speaker in deciding resignation should not be fettered by direction or observations of court.
A bench headed by Chief Justice Ranjan Gogoi has directed that the Speaker's decision on resignation of rebel lawmakers be placed before it.
The Speaker should be allowed to pass appropriate orders within parameters of Article 190 of the Constitution and relevant the Rules, the top court says.
Jul 17, 2019 10:42 (IST)
Karnataka Speaker free to decide: Supreme Court
The Karnataka Speaker cannot be forced to take a decision within a time frame, the top court says.
It says the rebel lawmakers should decide whether to attend the Assembly or not. "They ought not to be compelled to participate in the Trust motion on July 18."
We have to maintain constitutional balance, the court says.
Jul 17, 2019 10:38 (IST)
If the resignations are accepted, the coalition's 118 members will come down to 100 and the majority mark will drop from 113 to 105. The BJP has 105 members and the support of the two Independents, which would take its tally to 107.
Sixteen legislators of the JDS-Congress coalition and two independent lawmakers have resigned over the past two weeks.
Jul 17, 2019 10:37 (IST)
Former Karnataka Chief Minister and BJP leader BS Yeddyurappa says: "We are waiting for Supreme Court's decision, the MLAs who have resigned will not be affected. Tomorrow the chief minister is going to move the confidence motion, he will lose the mandate, let us see what will happen."