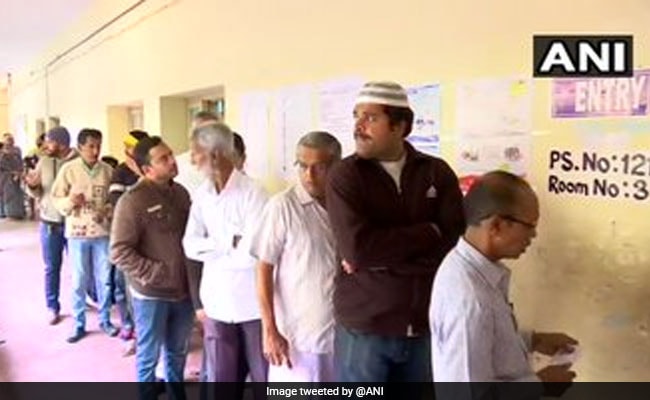 An estimated 6.06 per cent of voting took place during the first two hours since polling began in 15 assembly constituencies going to bypolls in Karnataka on Thursday.

BJP candidates including Byrathi Basavaraj of KR Puram, Gopalaiah of Mahalakshmi Layout, ST Somashekar of Yeshwanthpura were among the early voters at their polling booths.

People were seen standing in queues to cast their votes at various polling booths in different parts of the state, but the number was not big.

The by-elections are being held to fill the vacancies caused by the disqualification of 17 rebel Congress and JD(S) MLAs, whose rebellion led to the collapse of the HD Kumaraswamy-led coalition government in July and paved the way for the BJP to come to power.

The BJP needs to win at least six of the 15 seats to remain in majority in the 225-member assembly (including the Speaker, who has a casting vote), which would still have two vacant seats -- Maski and R R Nagar.

A total of 37,77,970 electors are eligible to cast their votes at 4,185 polling stations in 15 constituencies going for polls.

Out of 15 assembly segments going to by-polls, 12 were held by Congress and three by JD(S).

BJP has fielded 13 of the 16 disqualified legislators who had joined the party, as its candidates from their respective constituencies from where they had won in the 2018 assembly elections on Congress and JD(S) tickets.