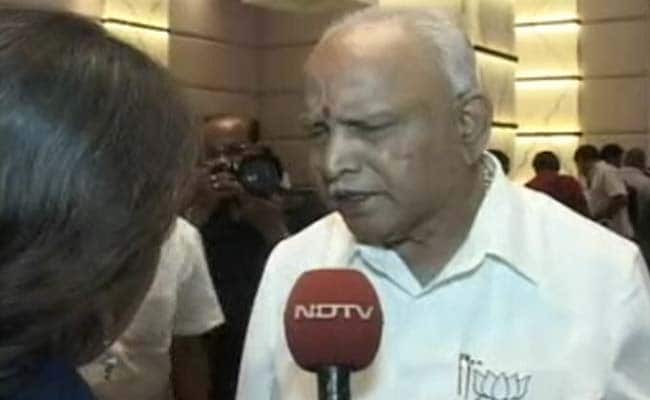 The BJP in Karnataka has won more than half of the state's 28 Lok Sabha seats in the last three general elections. In 2014, the party won 17 and this time round, state party president and former chief minister, BS Yeddyurappa, said that the BJP will do even better.

Speaking to NDTV in Bengaluru on Wednesday he said, "This time PM Modi will come back to power. We are going to win more than 275 seats. In Karnataka, minimum we are going to win 22 seats. We have already toured the entire state. The condition is very favourable for the BJP because of the Congress and JDS, and PM Modi's achievement in the last 4 years and 9 months."

While on the campaign trail in north Karnataka, Mr Yeddyurappa had said that if the BJP won more than 22 Lok Sabha seats in Karnataka, the party would also form the government in the state soon after. But he was more reticent on that issue this time. He said, "I don't want to say anything on that now. Our first target is to win at least 22 Lok Sabha seats and we want to make Modi ji Prime Minister."

Mr Yeddyurappa said the challenges faced by the ruling coalition partners in Karnataka - the Congress and the JDS - when it came to seat sharing, would only benefit the BJP. "They are fighting each other. That will be helpful to us."

JDS leader and former prime minister Deve Gowda has made it clear that he would like two of his grandsons to contest - Nikhil, the actor son of chief minister, HD Kumaraswamy and Prajwal, the son of HD Revanna, a minister in the Karnataka cabinet. But Mr Yeddyurappa, who has political ambitions for his own sons, chose to be cautious in his reply to the question on the Gowda grandsons possibly being given tickets from Mandya and Hassan respectively. "I don't have to react. We are going to put very strong candidates everywhere," he said.

There has been speculation that the BJP would give the Mandya ticket to Sumalatha Ambareesh, wife of the late Kannada superstar, Ambareesh, who had been a Congress politician. With the Congress giving the Mandya ticket to its coalition partner - the JDS, Sumalatha Ambareesh has indicated that she would still contest, as an Independent, if necessary. Mr Yeddyurappa told NDTV, "We have not yet decided; our national leaders will take a decision. On Friday I will go to Delhi and discuss. We don't know whether she will contest or not."

But he did say that Tejaswini, the wife of late BJP leader, Ananth Kumar, would contest the South Bengaluru seat her husband had represented without a break from 1996 onwards. "Tejaswini is going to contest." He also confirmed that Umesh Jadhav, till recently a Congress lawmaker, would also be given a BJP ticket. "100% he is going to contest." Mr Jadhav is likely to contest in Kalaburagi in north Karnataka - the seat currently held by Congress veteran, Mallikarjun Kharge. When NDTV asked Yeddyurappa, his response to the allegations by the Congress that Mr Jadhav had sold himself to the BJP, Mr Yeddyurappa just laughed and said, "Nonsense!"