Kangana Ranaut, in a stinging attack on the Congress said, "The state the country was in during the Congress rule, it can't get worse than that". 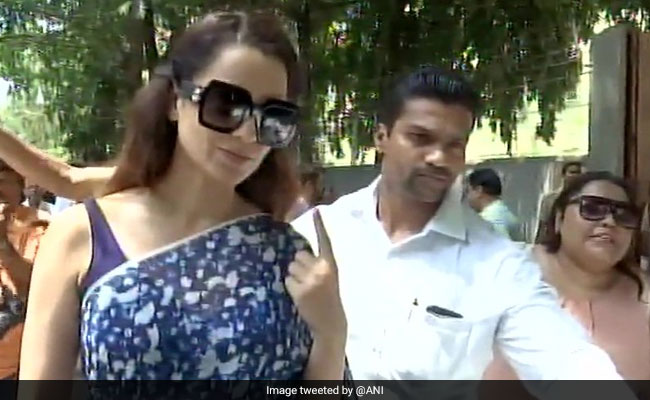 Kangana Ranaut has recently been very vocal about her political views

Bollywood actress Kangana Ranaut cast her vote in Mumbai's Khar along with a string of Bollywood actors in Phase 4 of the national elections today. Known for her strong statements, she launched a veiled attack on the Congress party saying India was "gaining independence in the real sense" as earlier "we were slaves" of the Italian government".

She urged people to vote as well while launching salvo against the Congress. "It's a very important day. This day comes once in five years. Please make use of it. I feel India is gaining independence in the real sense of the term on Monday. Because before this, we were servants of the Mughal, the British and the Italian governments. Please exercise your 'swaraj (independence)' and vote."

The "Italian government" remark is an apparent reference to UPA chairperson Sonia Gandhi who was born and raised in Italy before her marriage to Rajiv Gandhi, the former prime minister of India. Ms Gandhi led the Congress for nearly two decades before passing on the baton to son and current party chief Rahul Gandhi.

Ms Ranaut, in a stinging attack on the Congress then said, "The state the country was in during the Congress rule, it can't get worse than that".

Kangana Ranaut has recently been very vocal about her political views and has taken shots at her colleagues for not taking a stand. She has called out to actors Ranbir Kapoor and Alia Bhatt for refusing to talk politics and also called Ms Bhatt's performance in her recent film "Gully Boy" mediocre. Recently, her sister Rangoli Chandel, who is also her manager, took a jibe at Alia Bhatt by calling her "British". Alia Bhatt holds a British passport.

On the big screen, Kangana Ranaut, a three-time national award winner, last appeared in "Manikarnika: The Queen of Jhansi".

All six constituencies of Mumbai voted on Monday in the ongoing seven-phased elections. The results will be declared on May 23.