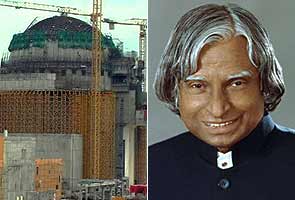 Chennai: Former President and one of the country's top scientists  APJ Abdul Kalam has given a clean chit to safety measures at the upcoming Kundankulam nuclear plant in Tamil Nadu, and has suggested a 10-point development plan for the people of the area who have been up in arms demanding that the plant be closed as they fear for their lives and safety.

India's 'missile man' visited the upcoming nuclear plant yesterday, inspected the security measures and said he was "fully satisfied". But Mr Kalam's distinguished scientific background and his son-of-the-soil status did not cut ice with the thousands of villagers, whose protests have held up work on the Rs. 13,700-crore project for almost a month. The project is at an advanced stage, with 2 x 1000 MW nuclear reactors almost ready. With protests against the project mounting, the Tamil Nadu Cabinet too has asked for a temporary halt in work.

To address the worries of the people, Dr Kalam has also suggested a 10-point development programme, which he suggests should be implemented by 2015. The plan, which would cost about Rs 200 crore to implement, envisages building four-lane highways, a mega desalination plant and construction of houses, schools and hospitals in the are to benefit  Kudankulam and its 60-odd neighbouring villages, IANS reports.

The 39-page report, which also suggests setting up industry to provide direct employment in the area, has been authored by Mr Kalam and his advisor V Ponraj and has been submitted to the Tamil Nadu and central governments. Dr Kalam's 10 points include:

The report has also suggested that the government should allay fears about the plant by providing them proper information and start generation of power at Kundankulam that houses the safest reactors in the world.

An expert committee appointed by the Centre is expected to begin interaction with local communities in a bid to convince them of the plant's safety soon. Activists in the area say many issues are unsolved. "We are not just worried about the safety of the reactor, we need to know about the waste issues, the decommissioning issues, the overall freshwater issues. There are so many other issues that have been left unanswered until now," said SP Udhayakumar, Coordinator, People's Movement against Nuclear Energy.

The Bharatiya Janata Party has meanwhile pointed out that the countries which had exported the technology to India had stopped using it themselves. Party spokesperson Prakash Javdekar said that it was for the government to reassure the nation about the safety of the project and allay the fears of the people opposed to it. He, however, declined to comment on Mr Kalam's report, saying he was a respected person.

With Mr Kalam's initiatives not appearing to win hearts, the challenge for the government committee is only getting tougher.

The 2 X 1000 MW nuclear power plant is being built by Nuclear Power Corporation of India Ltd (NPCIL) with Russian technology and equipment.

The first unit is expected to go on stream in December. The project is estimated to cost around Rs.13,160 crore (over $2.5 billion).