PM Modi will now fly directly to Maghar in Sant Kabir Nagar district from Lucknow, instead of landing first at Gorakhpur airport that was closed yesterday after rainwater flooded the runway. 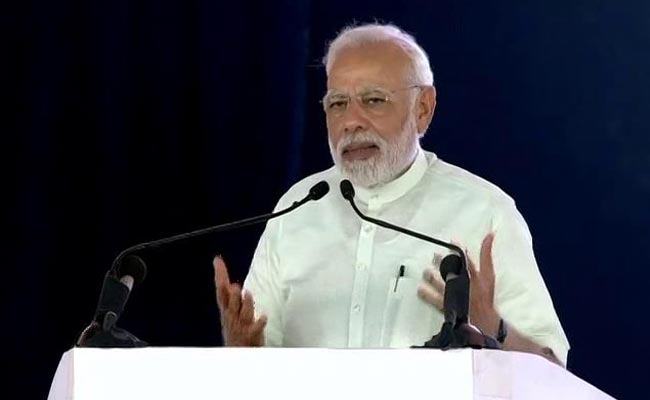 On PM Modi's "Mann Ki Baat" he had recalled the contribution of Kabir Das on last week. (File)

Prime Minister Narendra Modi will address a rally today in Maghar town and lay the foundation stone for an institute named after Kabir Das to mark the 500th death anniversary of the mystic poet, in a visit affected by heavy rains.

The rain yesterday appeared to have forced changes in his plans.

PM Modi will now fly directly to Maghar in Sant Kabir Nagar district from Lucknow, instead of landing first at Gorakhpur airport that was closed yesterday after rainwater flooded the runway.

Authorities were also pumping out water from the venue of his public meeting in Maghar.

According to an official statement, the prime minister will offer a 'chadar' at Kabir's 'mazaar' in Maghar.

He will visit the Sant Kabir cave and lay the foundation stone for Sant Kabir Academy being set up to highlight the saint's teachings and philosophy, the statement said.

During his monthly radio address "Mann Ki Baat" on Sunday, the prime minister had recalled the contribution of the 15th-century poet-saint in dispelling superstition.

Kabir Das preferred to breathe his last in Maghar despite the common belief that whoever dies there does not reach heaven, he had said.

He said about two lakh people are expected to attend the rally.

Party workers have reached out to people in seven districts for the rally, he said.

Earlier, according to the district BJP unit, Chief Minister Yogi Adityanath was scheduled to receive the prime minster at Gorakhpur airport.

The two leaders were then to leave for Maghar by helicopter.

The prime minister will be taken round the mausoleum of Kabir Das.

His visit will give a message of social harmony as Sant Kabir stood for equality, he added.

Waterlogging has occurred at the venue where PM Modi will address the public meeting and the administration is working at draining the water out.

CM Yogi was scheduled to come to Gorakhpur after the inspection but he has returned to Lucknow after the change in PM Modi's programme.

Now, the prime minister will fly to Maghar from Lucknow and not visit Gorakhpur, the district's information department said.

"The entire rally venue is divided into 37 blocks, two wings and four zones. One lakh people would be able to sit in the main pandal," BJP zonal president Dharmendra Singh said.