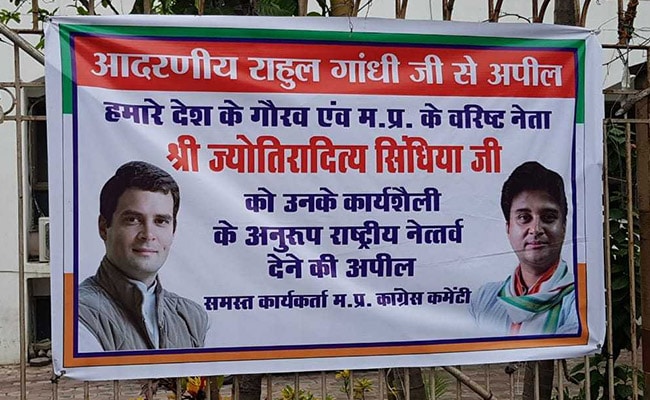 The poster was seen outside the Madhya Pradesh Congress office in Bhopal for a few hours.

A poster demanding that Jyotiraditya Scindia be made Congress president after Rahul Gandhi's resignation was seen outside the Madhya Pradesh Congress office in Bhopal for a few hours on Monday morning, before it was removed.

"This is an appeal to respected Rahul Gandhi that the pride of our nation and senior leader Jyotiraditya Scindia should be made party president," read the poster that surfaced a day after Jyotiraditya Scindia's resignation as Congress general secretary after the party's national election debacle.

Even the poster's brief appearance was enough to prompt Jyotiraditya Scindia's supporters to pitch their leader for the Congress top post.

"If a new Congress president has to be appointed, then it should be someone young as well as experienced, which has been demanded by Punjab Chief Minister Captain Amrindar Singh also. Our leader Jyotiraditya Scindia is young, experienced and effective leader, who is also close to Rahul Gandhi and Sonia Gandhi as well, so he would be good choice as next Congress president," said Madhya Pradesh minister Pradumna Singh Tomar.

Rahul Gandhi announced his decision to resign as Congress president last week in a long, public letter. He said he had asked party leaders to choose his successor and also that he wouldn't participate in the process.

Several Congress leaders have quit since then.

On Sunday, Mr Scindia tweeted: "Accepting the people's verdict and taking accountability, I had submitted my resignation as general secretary of AICC to Shri @RahulGandhi. I thank him for entrusting me with this responsibility and for giving me the opportunity to serve our party."

Not everyone approved of the poster. Another state minister, Sajjan Singh Verma - a known loyalist of Chief Minister Kamal Nath - said the poster betrayed "over-enthusiasm of Scindia supporters". He demanded that Priyanka Gandhi Vadra be made the next Congress president.

Surprisingly, Govind Singh Rajput, who is considered a Scindia loyalist, criticized the poster campaigns, indicating a change in the stance of some supporters with their leader apparently not enjoying the kind of power he once had.

Friction between the Scindia and Kamal Nath camps isn't new. At a state cabinet meeting chaired by the Chief Minister some weeks ago, there was heated exchange of words between the two factions.

Earlier this year, 48-year-old Mr Scindia had been appointed, along with Priyanka Gandhi Vadra, as Congress general secretary in charge of the Uttar Pradesh campaign for the national election. It was viewed as a reward after he bowed out of the race for chief minister in Madhya Pradesh.

The Congress flopped miserably in Uttar Pradesh, went from two seats to one - having lost its chief Rahul Gandhi's seat too -- and Mr Scindia was defeated in his own seat in Madhya Pradesh, Guna, where he had won five times since 2002.