Congress chief Rahul Gandhi, who was passing by, stopped and took the journalist to AIIMS 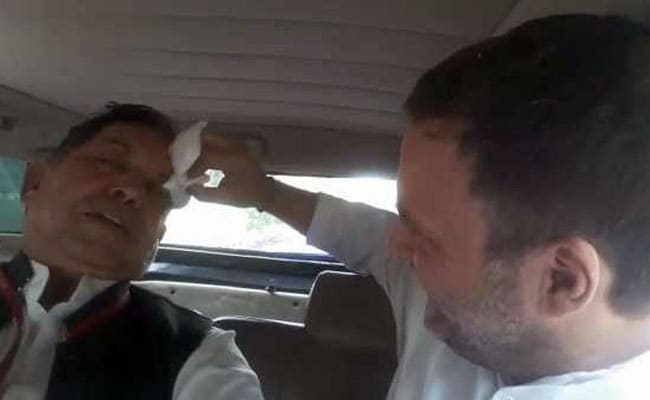 A journalist who met with an accident in Delhi on Wednesday, found a helping hand in Congress chief Rahul Gandhi. Rajendra Vyas, the owner of a Rajasthan-based daily, had met with an accident at Central Delhi's Humayun Road. Mr Gandhi, who was passing by in his car, stopped and picking him up, took him to the All India Institute of Medical Sciences or AIIMS.

In a video shot by his staff, Mr Gandhi is seen dabbing the journalist's bruised forehead with a handkerchief.

Midway through the video, the journalist is heard saying, "Sir, please apply the handkerchief once again. I will use the video for my work."

The 48-year-old Congress chief is seen laughing and obliging.

Mr Vyas is being treated at the hospital.

Mr Gandhi was on his way back from Talkatora Stadium where he had gone to a public meeting.  After videos of the incident started doing the rounds on social media, senior Congress leader Ajay Maken tweeted:

We can narrate hundreds of such instances- But the problem is, that he does not want to publicise these.
This makes him perhaps more humane! https://t.co/RXrz9A34CU

One such incident was caught on camera earlier this year, when Mr Gandhi was visiting Odisha.

A journalist, who was covering the visit, lost his balance and fell when mediapersons swarmed around the Congress chief as he emerged from the Bhubaneshwar airport.

In a cellphone video shot from the spot, the journalist is seen tumbling off the footpath onto the road, landing on his head.

Mr Gandhi immediately rushed forward and helped him up.

The Congress chief is contesting from his family stronghold Amethi in the coming Lok Sabha election. He is also expected to file nomination from a second seat in South India.