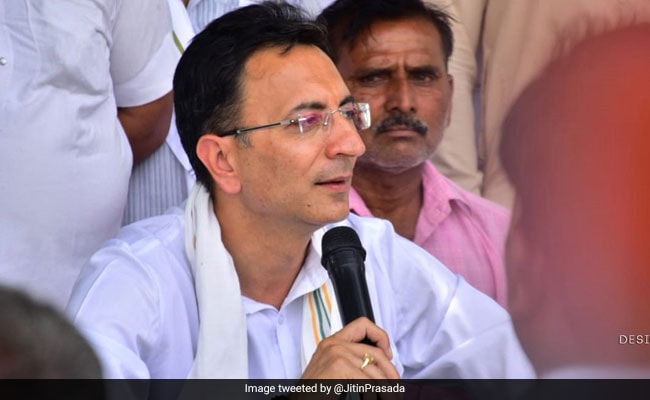 Jitin Prasada, who is from UP's Shahjahanpur, had recently crossed over to the BJP from Congress

Four new members of the Uttar Pradesh Legislative Council, including state minister Jitin Prasada, were administered oath at a function in Lucknow on Wednesday.

The four members were nominated to the upper house of the legislature last month.

UP Chief Minister Yogi Adityanath, Deputy CMs Keshav Prasad Maurya and Dinesh Sharma were among those who were present on the occasion.

Jitin Prasada, who is from UP's Shahjahanpur, had recently crossed over to the BJP from Congress and was also made a minister in the Yogi Adityanath government.

Sanjay Nishad was in the news for his demand that the BJP should project him as a deputy chief ministerial face in the upcoming Assembly elections. He had claimed that Nishads (fishermen) constitute about 18 per cent of the electorate and play a deciding role in 160 assembly seats.

The Nishad Party had contested the 2017 assembly elections in alliance with the Peace Party led by Dr Mohamed Ayub and contested 72 seats. Its candidate Vijay Mishra had won from Gyanpur seat in Bhadohi district.

Union minister and BJP in-charge for UP Dharmendra Pradhan had recently announced a tie-up with the Nishad Party for the 2022 election.