Jamshedpur: A woman, after coming to know that Jharkhand health minister Banna Gupta has come to the hospital, requested him to arrange blood for her husband. 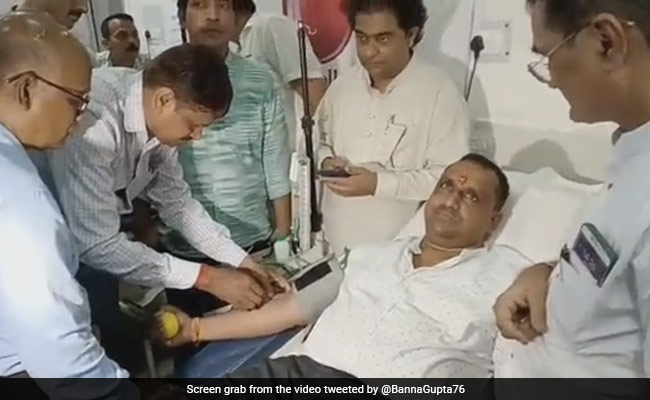 Jharkhand minister Banna Gupta said he's a human being first and he discharged his duty by saving a life.

Jharkhand Health and Disaster Management Minister Banna Gupta on Saturday donated blood to a needy patient undergoing treatment in government-run MGM Hospital in Jamshedpur, where he had gone to attend an official programme.

A woman, after coming to know that the minister has come to the hospital, reached the venue and requested him to arrange blood for her 49-year-old husband who urgently required it.

When she said she failed to get a donor, Mr Gupta himself donated blood.

The woman, a resident of Kalikapur under Potka block of the district, showered blessings on the minister.

Later, he told reporters: "I am a human being first. I discharged my duty to save the life of a sister's husband.”

In March, Mr Gupta was on his way from Jamshedpur to Ranchi to attend the assembly session when he spotted three youths who were injured in a road accident at Dulmi in Seraikela-Kharswan district.

The minister got down from his vehicle, called an ambulance and waited on the spot till the victims were sent to a nearby hospital.

On Saturday, Mr Gupta inaugurated a centre at the MGM Hospital where X-ray, ultrasound and CT scans can be done at a nominal price. It will be operated on PPP mode.