Jamia Firing: Rahul Gandhi's remarks come a day after a 17-year-old pulled out a gun and fired at students protesting against the citizenship law near Delhi's Jamia Millia, injuring one student. 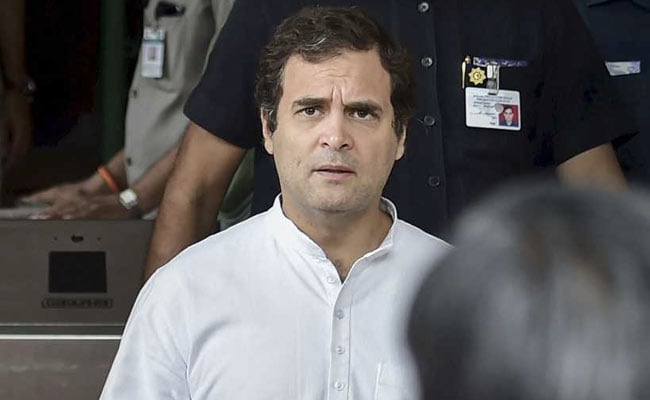 "Who paid the Jamia shooter?," shot off Congress leader Rahul Gandhi this morning as he referred to Thursday's dramatic scenes near Jamia Millia Islamia University in Delhi when a teenager  fired fired at people protesting the citizenship law.

A 17-year-old on Thursday afternoon pulled out a gun and fired at students protesting against the citizenship law near Jamia Millia, injuring one student. Only after he fired the shot did the police, present in large numbers to keep a check on the protest, react.

"Who paid the Jamia shooter?," the Congress MP from Kerala's Wayanad said outside parliament on the opening day of the budget session.

Earlier on Thursday, Mr Gandhi had tweeted a quote from Mahatma Gandhi, "I cannot teach you violence, as I do not believe in it. I can only teach you not to bow your heads before anyone, even at the cost of your life."

Tweeting on the Jamia firing, Asaduddin Owaisi, chief of All India Majlis-e-Ittehadul Muslimeen (AIMIM), on Thursday challenged Prime Minister Narendra Modi to "identify him by his clothes". The comment was a reference to a remark by PM Modi in which he targeted those opposing the citizenship law, which critics say discriminates against Muslims, and claimed "you can easily make out who is spreading violence by the clothes they wear".

The teenager shooter, a Class 12 student from Uttar Pradesh, has been charged with attempted murder,  the police said today.

The incident comes against the backdrop of hate speeches made during the campaign for the February 8 Delhi election; Union Minister Anurag Thakur has been banned from campaigning for 72 hours after he was caught on camera encouraging the slogan "Desh Ke Gaddaro Ko, Goli MaaroS****n Ko (Shoot the traitors)" at a rally.