It Started With Demonetisation: Congress Attacks Centre On GDP Fall 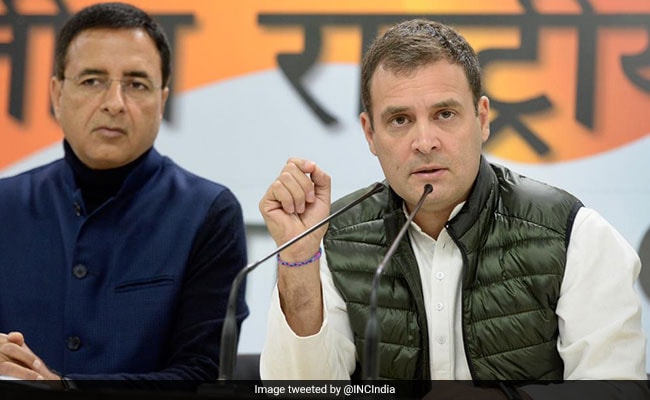 Rahul Gandhi had led Congress's attack on central governments handling of Covid crisis and its effects.

Congress leader Rahul Gandhi led his party's attack on the BJP-led central government over the 24 per cent fall in the Gross Domestic Product - the worst in independent India's history - saying the economy's destruction began with demonetisation in 2016 and that every policy decision thereafter has been erroneous.

India's economy suffered its worst slump on record in the April-June quarter, with the Gross Domestic Product (GDP) contracting by 23.9 per cent as the coronavirus-related lockdown weighed on the already declining consumer demand and investment. Recovery is also uncertain as India is quickly becoming the global epicenter for coronavirus infections.

"GDP -23.9. Destruction of the country's economy began with demonetisation. Since then, the government has introduced one erroneous policy after another," Rahul Gandhi said in a tweet in Hindi.

Earlier in the day, Mr Gandhi had also said the government was destroying the economy by attacking the informal sector, said it was "unfortunate" it had chosen to ignore the signs.

Stating that the BJP-led central government has ruined the Indian economy, Congress leader Priyanka Gandhi Vadra said that six months ago - when the lockdown was announced - Rahul Gandhi had spoken of an "economic tsunami".

Referring to the Rs 20 lakh crore economic relief package announced by the centre in May, Priyanka Gandhi said, "The government announced an economic package which was just for show; look at the condition now."

Taking a dig at the Prime Minister in a tweet, Congress's chief spokesperson Randeep Surjewala said, "Modi ji, at least now accept that what you hailed as masterstrokes were actually disaster strokes - demonetisation, faulty GST and lockdown."

During a virtual press conference on Monday, Congress veteran leader and former finance minister P Chidambaram said that experts had warned the government of just such a scenario and that it could take "many months before the economy turns the corner".

The contraction in the Gross Domestic Product is the sharpest contraction since quarterly figures started being published in 1996 and worse than what was expected by most analysts. Chief Economic Adviser KV Subramanian, however, has said the economy is "experiencing a V-shaped recovery" after the lockdown eased.

While there are early signs that activity began picking up this quarter as lockdown restrictions were eased, the recovery is uncertain as India is quickly becoming the global epicenter for virus infections.

India has been reported the highest number of daily cases anywhere in the world since August 4. On Monday, the country reported 69.921 new infections, with total cases nearing 4 million in a nation of 1.3 billion. That could delay the consumption-driven economy from fully reopening.