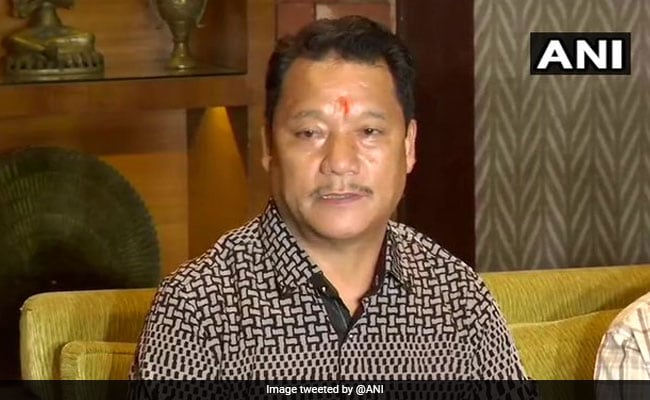 Bimal Gurung reappeared in Kolkata after three years on Wednesday.

The sudden reappearance of Bimal Gurung and his switching of loyalty from NDA to Trinamool has drawn fire from rivals, especially on the incendiary issue of Gorkhaland statehood.

The leader of Gorkha Janmukti Morcha, an outfit spearheading the statehood movement in northern West Bengal's Darjeeling hills, had gone underground following the death of a policeman in an alleged shootout with his supporters in October 2017. He was an NDA ally, helping the BJP win the Darjeeling Lok Sabha seat multiple times.

On Wednesday, however, the 56-year-old Mr Gurung said, "I want to see Mamata Banerjee as Chief Minister again and I will do my best to get her all the seats in North Bengal in the 2021 elections."

In a tweet responding to his new stand, Mamata Banerjee's Trinamool Congress welcomed his "commitment to peace" and "decision to withdraw support from the NDA".

We welcome Bimal Gurung's commitment to peace & decision to withdraw support from NDA while reposing faith in @MamataOfficial's leadership. BJP's attempts to use Gorkhaland issue for petty politics & their untrustworthy nature now lay fully exposed before people of Bengal. (1/2)

"The question now is whether Mamata ji will concede the issue of Gorkhaland or is Mr Gurung going to relinquish the demand for a separate state," Mr Chowdhury said, pointing that the person who had slapped UAPA charges against the Gorkhaland movement leader was now pampering him.

The BJP wasn't far behind. Citing a press statement issued by Mr Gurung, party leader Sayantan Bose said the BJP and the Prime Minister had not conceded to the Gorkhaland demand.

"Does it mean that, to stay in power, Mamata Banerjee has decided to divide Bengal?" Mr Bose asked.

Both the BJP and the Congress have pointed out that Mr Gurung has several serious cases filed against him. What happens to those cases now, they asked.

Ms Banerjee's rivals say desperation is leading her to rope in people like Mr Gurung and Chhatradhar Mahato, the leader of a Moist-friendly organisation.