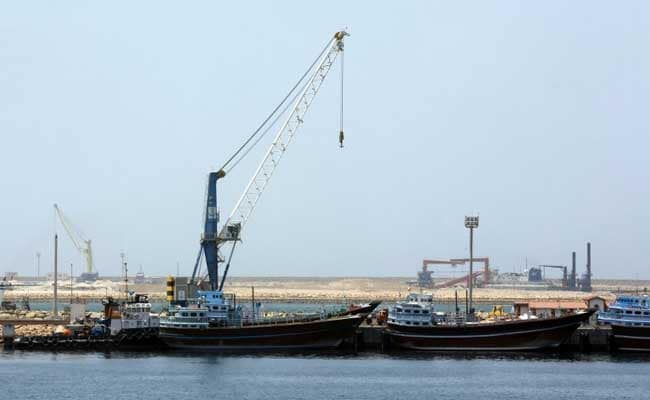 New Delhi: Keen on rolling out infrastructure projects in Iran and Afghanistan, union minister Nitin Gadkari has said that once Chabahar Port in Iran becomes operational, there will be no looking back as it will be a gateway to golden opportunities. As a special envoy of India, deputed by Prime Minister Narendra Modi, Road Transport and Shipping Minister Nitin Gadkari is in Tehran and represented India at the swearing-in of President Hassan Rouhani for the second term.

"Talks are on for building railways and roads through Chabahar till Afghanistan and then we have access to Russia. Once Chabahar is operationalised, which we are hopeful to be in 12 to 18 months, it will prove to be a gateway to golden opportunities to boost trade and business," Mr Gadkari said.

"We are hopeful of ratification of Trilateral Transit and Transport Agreement by Iran and once approvals are given, the work will start," Mr Gadkari said.

The trilateral pact was inked during Prime Minister Narendra Modi's visit to Tehran in May 2016. The pact envisages establishment of Transit and Transport Corridor between India, Iran and Afghanistan using Chabahar Port as one of the regional hubs for sea transportation in Iran besides multi-modal transport of goods and passengers across the three nations.

The cabinet and the President had ratified the pact in November and December 2016, respectively. A government official said Afghanistan has also ratified it but Iran is yet to complete the internal processes of the ratification.

Mr Gadkari said operationalisation of the port will not accelerate the infrastructure projects but will be a "win-win situation" for the nations as it would give tremendous boost to trade and offer vast opportunities to investors.

"Chabahar will not only boost ties between Iran and India but we will be closer to Afghanistan and then Russia... We can export goods till Russia. This will be a direct route," he said.

India has already built the Zaranj-Delaram Road in Afghanistan where the cargo reaching Zehedan can connect to. "The rail route is aimed at connecting the existing rail network of Iran at Zahedan, and subsequently to Mashad in north area, thereby providing access to Turkmenistan as well as northern Afghanistan through its connection to the Bafq-Mashad route," an official said.

Promoted
Listen to the latest songs, only on JioSaavn.com
This project will significantly enhance the opportunity for trade and business among the nations. Chabahar-Zahedan Railway line project is located in the Sistan-Baluchistan province in eastern Iran.

Mr Gadkari's visit assumes significance as India has accelerated work on Chabahar port and finalised some tenders for installation of key equipment at the port. "Civil construction work has started there. We have finalised tenders worth Rs 380 crore for equipment out of Rs 600 crore and once the port becomes operational it will become a growth engine," the minister had said.