P Chidambaram is being investigated over allegations that he facilitated foreign investment in INX Media, in 2007, when he was Finance Minister.

The new CBI office was inaugurated in 2011 when P Chidambaram was Home Minister.

Hours after the dramatic arrest of former Union Minister P Chidambaram, a video that was in wide circulation showed him at the opening of the very building where he was kept in custody last night - the CBI headquarters in central Delhi.

On June 30, 2011, Mr Chidambaram, the Home Minister at the time, was a special guest as then Prime Minister Manmohan Singh inaugurated the new complex.

Underscoring the irony of Mr Chidambaram's arrest by the agency that once reported to him, the senior leader is seen on the stage along with colleagues like Kapil Sibal and Veerappa Moily. P Chidambaram was a special guest at the opening ceremony of CBI headquarters in 2011.

The visitor's book has a handwritten note by him:  "Having worked closely with the CBI in different capacities since 1985, I am proud to see this organization acquire its new 'home'. May India's premier investigating agency grow from strength to strength and be a strong pillar of our administrative system."

Later in that function, all the ministers were taken on a tour of the centrally air-conditioned building and even shown the lock-up facilities on the ground floor, which is dubbed the guest-house; Mr Chidambaram spent last night in one of those lock-up suites, specifically, No. 3. There were two guards outside his room

#WATCH ANI file footage: The then Union Home Minister, P Chidambaram at the inauguration of the new Central Bureau of Investigation (CBI) headquarters in Delhi on June 30, 2011. Chidambaram was arrested by CBI yesterday and brought to this complex. pic.twitter.com/ikuxIzaSyF

He was not questioned last night after he was brought to the building following his dramatic arrest from home. The interrogation started this morning, after he was allowed home-cooked food and a change of clothes.

Mr Chidambaram is being investigated over allegations that he facilitated foreign investment in a television company, INX Media, in 2007, when he was Finance Minister, at the instance of his son Karti Chidambaram, who allegedly received kickbacks. 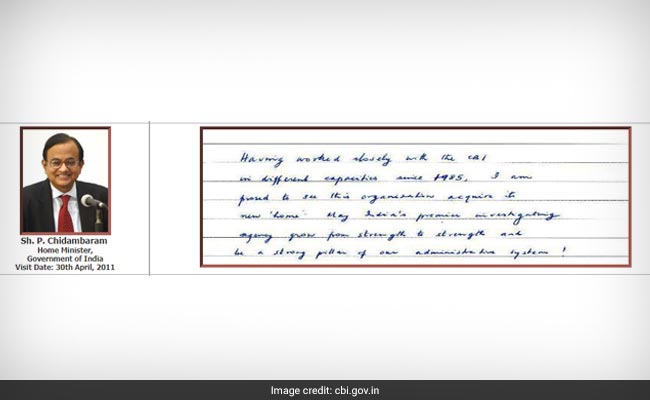 Mr Chidambaram and his son were named by INX co-founders Peter and Indrani Mukerjea, who are currently in jail in connection with the murder of Indrani Mukerjea's daughter Sheena Bora.

Mr Chidambaram, not seen since Tuesday evening, was arrested 90 minutes after he made a surprise appearance at a Congress press conference on Wednesday evening.

"If I am asked to choose between life and liberty, I shall unhesitatingly choose liberty," Mr Chidambaram said at the press conference, flanked by senior colleagues.

Will "Enjoy Samosas Together": PM Modi On Australian PM's "ScoMosas"