Internet Cut In Parts Of Delhi, Nearby Areas Amid Farmers' Protest

Many people shared on social media screenshots of a text message they received on their mobile phones, informing the Internet has been suspended. 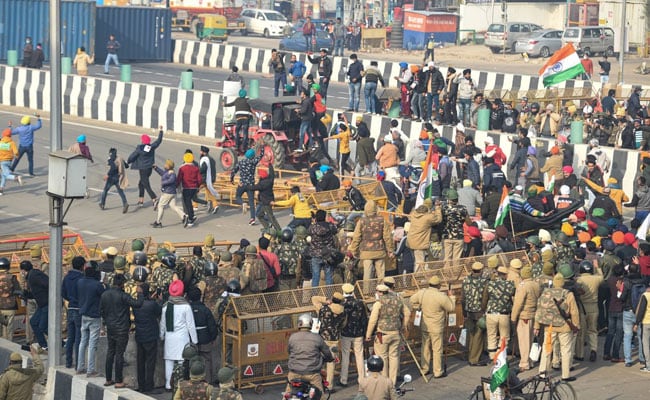 Internet services have been temporarily suspended in some parts of Delhi amid clashes between the police and thousands of agitating farmers, whose tractor rally veered off the permitted course entering several areas of the city, including the iconic Red Fort, news agency ANI has reported.

Many people shared on social media screenshots of a text message they received on their mobile phones. "As per government instructions, Internet services have been stopped in your area till further notice," the message read.

The Internet has been shut at areas near the Singhu border - the epicentre of farmers' protest against the three central agriculture laws - Ghazipur, Tikri, Mukarba Chowk, and Nangloi till 11.59 PM on January 26, news agency ANI quoted Union Home Ministry sources as saying.

The protesting farmers, led by a front of 40 unions, had secured the police permission to hold the rally on the outskirts of the city after a court battle. One of the participants, the Kisan Mazdoor Sangharsh Committee, last evening refused to stick to the designated route that was to pass through several areas of the national capital.

The rally was scheduled to enter the national capital at around 11.30 AM, after the conclusion of the Republic Day parade, but hundreds of farmers entered the city hours before the scheduled time, catching the security personnel off guard.

Dramatic visuals showed farmers breaking through the police barricades on their tractors.

By afternoon, hundreds of protesters reached the Red Fort and occupied the ramparts of the monument. One of the protesters was seen on camera scaling the flagpole in front of the main gate of the monument and hoisting a yellow flag. The police later resorted to a mild lathi charge to clear the area.

The police also fired a few rounds of tear gas shells and used force to disperse the protesters at Nagloi Chowk, West Delhi.

A protester died near central Delhi's ITO in a tractor accident, police said. His fellow protesters, however, claimed he was killed in police firing.

The farmers' front that organised the rally has distanced itself from the chaos.

"We thank farmers for the unprecedented participation in today's Farmers Republic Day Parade. We also condemn and regret the undesirable and unacceptable events that have taken place today and dissociate ourselves from those indulging in such acts," it said in a statement.

"Governors Are Not Angels": Team Thackeray In Court On No-Trust Vote