In the group of emerging economies "revisions to the forecast are particularly large for India, where GDP contracted much more severely than expected in the second quarter," the IMF said in its report.

The 5.8 percentage-point downgrade is the biggest of the world's main economies.

India's economic growth forecast was slashed further by the International Monetary Fund (IMF) today, with the country now facing the biggest contraction of major emerging markets in the wake of the coronavirus pandemic.

Gross domestic product (GDP) will shrink 10.3% in the fiscal year to March 2021, the Washington-based lender said in its World Economic Outlook, far worse than the 4.5% decline predicted in June. The 5.8 percentage-point downgrade was the biggest of the world's main economies.

In the group of emerging economies "revisions to the forecast are particularly large for India, where GDP contracted much more severely than expected in the second quarter," the IMF said in its report.

India's lockdown at the end of March was the world's largest, causing the economy to contract 23.9% in the June quarter from a year ago as businesses and jobs were devastated. Authorities have failed to get the pandemic under control since then, with the number of coronavirus cases exceeding 7 million, second only to the US. 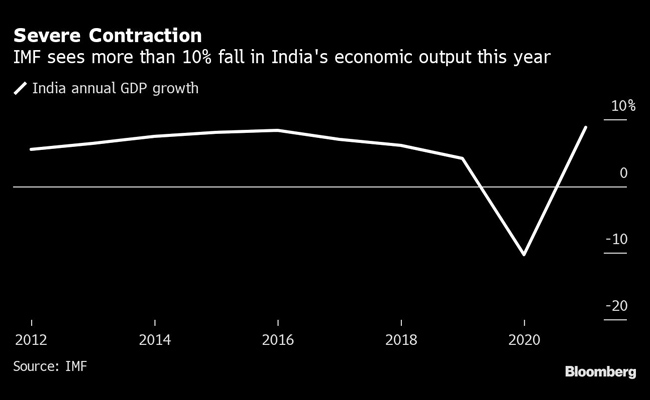 The International Monetary Fund report in its World Economic Outlook

In China, where the virus outbreak originated but is now under control, the recovery is strengthening, with the IMF predicting 1.9% growth this year, up from 1% forecast in June. "China's return to growth, which was stronger than expected" helped to underpin an improvement in the IMF's global outlook, the fund said.

"All emerging market and developing economy regions are expected to contract this year, including notably emerging Asia, where large economies, such as India and Indonesia, continue to try to bring the pandemic under control," it said.

The IMF's outlook for India is worse than the RBI's prediction of a 9.5% decline in GDP in the current fiscal year. Finance Minister Nirmala Sitharaman on Monday unveiled a set of measures to lift consumer spending after a previous package totaling 21 trillion rupees ($286 billion) failed to give an immediate boost to demand.