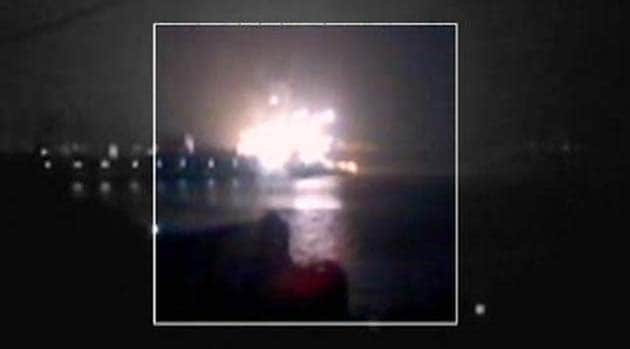 A video grab shows Indian Navy submarine INS Sindhurakshak on fire at the naval dockyard in Mumbai on Wednesday morning.

Mumbai: 18 crewmen are feared killed on the INS Sindhurakshak, a diesel-powered and world-class submarine, which exploded and sank shortly early this morning at the high-security naval dockyard in Mumbai. (See pictures)

"We hope for the best and prepare for the worst," said Naval Chief Admiral DK Joshi.

The submarine was fully loaded when the explosion took place shortly after midnight; missiles and torpedoes were detonated in the fire. Safety mechanisms to prevent that from happening did not work, the naval chief admitted.  An inquiry on the disaster is to be completed within four weeks, he said.  (Watch video of explosion )

The disaster is thought to be the worst for the Indian navy in over three decades. Defence Minister AK Antony described the sinking as the "greatest tragedy in recent time". (INS Sindhurakshak: how this loss impacts the Indian Navy)

After all-day efforts, naval divers managed to cut through thick layers of metal to enter the INS Sindhurakshak at 4 pm.

The multiple blasts were so loud that that they could be heard and seen across parts of South Mumbai.  Grainy amateur video footage taken by a witness showed a fireball in the forward section of the submarine where torpedoes and missiles are stored as well as the battery units.

The sinking of the submarine is a huge setback for the ambitious modernization drive of the Indian navy which has a total of 14 submarines of which only between seven and nine are operational at any point because of regular repair and refitting operations.

The INS Sindhurakshak had been returned by Russia less than a year ago after a major refit which cost India nearly 80 million dollars or 480 crore rupees. (INS Sindhurakshak was fine after refit: Russian firm)