The new variant, which has a so-called double mutation, is thought to be fueling India's deadlier new wave of cases that has made it the world's second worst-hit country, surpassing Brazil again, and has already begun to overwhelm its hospitals and crematoriums. 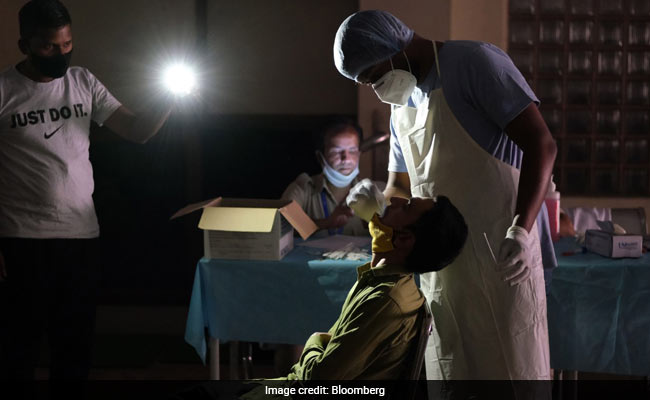 A health worker takes a swab sample under mobile phone torchlight during a power cut.

With India's daily tally of Covid-19 infections surging by records, public health experts worry that a new -- possibly more virulent -- coronavirus variant could be racing through the crowded nation of more than 1.3 billion people.

The new variant, which has a so-called double mutation, is thought to be fueling India's deadlier new wave of cases that has made it the world's second worst-hit country, surpassing Brazil again, and has already begun to overwhelm its hospitals and crematoriums. India has reported more than 14.5 million Covid cases so far and more than 175,600 fatalities.

"This is a variant of interest we are following," Maria Van Kerkhove, the World Health Organization's technical lead officer on Covid, told reporters Friday. "Having two of these mutations, which have been seen in other variants around the world, are concerning," she said, adding that there was a similarity with mutations that increase transmission as well as reduce neutralization, possibly stunting the ability of vaccines to curb them.

The new strain underscores the insidious nature of viruses and threatens to thwart containment efforts in India, despite measures such as the world's largest lockdown last year. An exploding outbreak in India risks undoing a hard-won victory over the pathogen for others, too, especially as this strain has now jumped to at least 10 other countries.

Here's what we know so far:

How did the "double mutation" variant emerge?
The new variant, called B.1.617, was initially detected in India with two mutations -- the E484Q and L452R. It was first reported late last year by a scientist in India and more details were presented before the WHO on Monday, according to Van Kerkhove.

Viruses mutate all the time, as part of evolutionary biology. Some mutations weaken the virus while others may make it stronger, enabling it to proliferate faster or cause more infections.

India's health ministry first acknowledged the presence of a "double mutant" at the end of March, but has downplayed it since. While it's a variant of interest, it "has not been stamped as a 'variant of concern' so as to say that it is more lethal or more infectious," Aparna Mukherjee, a scientist at the Indian Council of Medical Research, which works under the nation's health ministry, told Bloomberg TV on Friday.

The double mutation has been found in several countries like Australia, Belgium, Germany, Ireland, Namibia, New Zealand, Singapore, the U.K. and the U.S., according to an April 16 statement from the Indian government. "Higher transmissibility of this variant is not established as yet," it said.

Is it causing the record surge in infections in India?
Genome sequencing indicates the variant as a possible culprit, although the Indian government hasn't confirmed it.

The average prevalence of the variant surged to as high as 52% of samples sequenced in April from almost nothing in January, according to website tracker outbreak.info, which uses data from global repository GISAID. 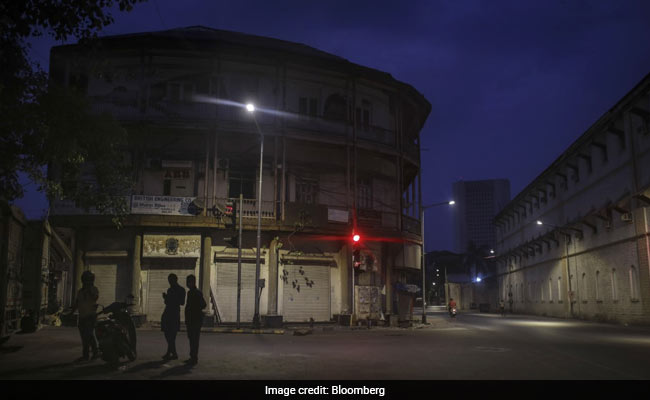 People gather near closed stores at night during a weekend lockdown in Mumbai, India, on Saturday, April 10, 2021. Maharashtra has halted all non-essential services, ordered private companies to work from home, and shut malls and restaurants through April

In some districts in Maharashtra state -- home to Mumbai and epicenter of the current wave that's triggered fresh lockdown-like rules -- the prevalence of this variant was more than 60%, according to Anurag Agrawal, director of the state-run Council of Scientific and Industrial Research's genomics institute that's conducting sequencing. The B.1.617 was present in samples from about 10 Indian states and while the percentage may vary, it was expected to rise as "it has two critical mutations that make it more likely to transmit and escape prior immunity," Mr Agrawal said.

Both mutations are known to decrease -- although not completely eliminate -- the binding of the antibodies created by infection and vaccination, according to Jesse Bloom, an associate professor for genome sciences and microbiology at the University of Washington.

"Mutations at sites E484 and L452 have been observed separately, but this is the first major viral lineage that combines the two," said Bloom. "I do think that this new viral variant is important to monitor." 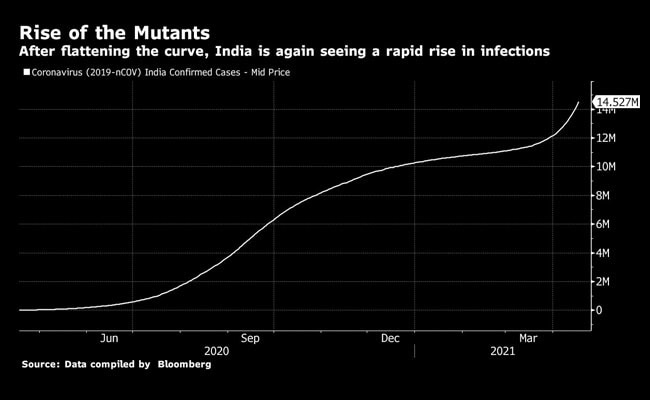 "We did the math -- we do believe that a lot of the increase in the reproduction number can be explained by these mutations," Nithya Balasubramanian, the head of health-care research at Bernstein India, told Bloomberg TV this week. "So, yes, the mutations are a big cause for worry."

After being complacent in mapping virus genomes in recent months -- India did sequencing for less than 1% positive samples as of last month -- the country is now scrambling to cover lost ground. "We are attempting to do at least 5% of whatever samples are there," said ICMR's Mr Mukherjee.

"It looks like that it is spreading faster than pre-existing variants," said Rakesh Mishra, the Hyderabad-based director of the Centre for Cellular and Molecular Biology -- another Indian lab doing genome sequencing of Covid samples. "Sooner or later, it will become prevalent in the whole country, given the way it is spreading."

Has it been found outside India?
This variant has been detected in at least 10 other countries, including the U.S., the U.K., Australia and New Zealand, according to the situation report on outbreak.info.

As of April 16, 408 sequences in the B.1.617 lineage have been detected of which 265 were found in India, the report shows. A surveillance report by the U.K. government said it has found 77 cases in England and Scotland so far, designating it as a "Variant Under Investigation."

We should all be worried for India ???????? for many reasons even if not in India:

-India is world's largest producer of #CovidVaccines. India halted all major vaccine exports order by other countries recently when its cases surged. pic.twitter.com/Hop37Pjo2a

New Zealand has temporarily suspended arrivals of its citizens and residents from India due to the spike in the number returning with Covid. Brazil was also shunned as a Covid superspreader by its neighbors who were nervous about the virus strain next door.

India's second wave -- given its size and rapid pace -- will worry other nations that have just about managed their own outbreaks after weeks of economy-devastating lockdowns.

Is it deadlier than other variants out there?
Researchers are still trying to figure that out. The features of the double mutant variant are under investigation, but the L452R mutation is well characterized in U.S studies, according to Agrawal. It increases viral transmission by around 20% and reduces antibody efficacy by more than 50%, he said.

Globally, three worrisome variants that have so far emerged in the U.K., South Africa and Brazil have caused particular concern. Studies suggest they are more contagious, and some evidence points to one of them being more deadly while another drives reinfections.

"The B.1.617 variant has all the hallmarks of a very dangerous virus," William A. Haseltine, a former professor at Harvard Medical School wrote in Forbes on April 12. "We must do all that is possible to identify its spread and to contain it."

Do vaccines work against it?
It's hard to know for sure without adequate data and research. India is testing whether the new variants, including the B.1.617, are capable of "immune escape or not," according to ICMR's Mukherjee.

Immune escape refers to a pathogen's ability to evade human bodies' immunity response. This means antibodies created after vaccination or prior infection may not protect a person from getting infected. If the new India variant shows "immune escape" behavior, this would have deep ramifications for India's vaccination program, which has picked up after a sluggish start and administered almost 120 million doses so far.

India has currently authorized three vaccines. Two of them are already in use while the third, Russia's Sputnik V, was approved this week. India also fast-tracked approval for foreign vaccines this week. All of these efforts risk being jeopardized if the shots turn out to be less effective against this double mutation variant.

"It is one of the ones that's on our radar, and in doing so, it means it's on the radar of people around the world," said Van Kerkhove.