Indians Are Convinced They Discovered The Zero. Can They Prove It? 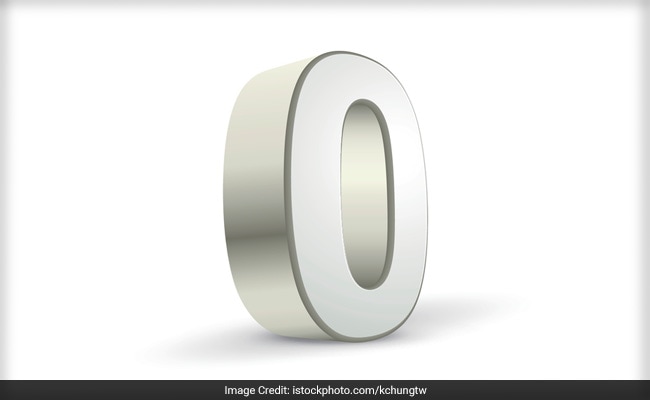 In the 5th century, an Indian mathematician used zero in the decimal-based place value system.

New Delhi: Indian students are taught very early in school that India's contribution to the world of mathematics is zero.

Way back in the 5th century, an Indian mathematician used zero in the decimal-based place value system, an achievement that citizens here have always celebrated with pride.

Now, a small but ambitious team of Indian and international scholars called Project Zero wants to go deeper. In the past year, they have been asking the question: What made the invention of zero possible in India?

The initiative is a heady cocktail of academic research and cultural pride, and it coincides with a new wave of hyper-patriotism among Indians, which has risen since the Hindu nationalist Prime Minister Narendra Modi came to power in 2014. Indians are reclaiming their heritage, embracing yoga, promoting the ancient Sanskrit language, buying traditional herbal products and celebrating - at times exaggerating - achievements in history.

At a three-day brainstorming event called Camp Zero in April in New Delhi, several scholars will take stock of what is known about the origin of zero and commission new research to find out what philosophical traditions may have led Indians to come up with the concept.

The mission, the group's website says, is an "attempt to settle once and for all the continuing controversy in the world as to when, where and why the zero digit was invented."

The project will also boost "the imagination and the image of India," said Robinder Sachdev, president of Imagindia Institute, a lobbying firm that promotes India's image and is supporting the project here.

The origin of zero has been an enduring subject of debate because other cultures, including the Mayans, also claim to have used the zero.

"Finding the source of zero is a bit like finding the source of the Nile," said Dinesh Singh, a mathematics professor at Delhi University and a member of the Indian Society for History of Mathematics. He is not associated with Project Zero. "Nobody has a clue about exactly when and how the zero came into play."

Scholars at Project Zero say the key may lie in the early Hindu and Buddhist philosophical discourses about the concept of "emptiness" and "void" that began many centuries before the mathematical zero came about.

"Even though zero popped up in different places in different forms, Indians are credited to have given zero to the world. But zero did not appear all of a sudden," said Annette van der Hoek, a Dutch scholar on Indian studies and the coordinator of the Zero Project. "We find the cultural notion of zero-ness or emptiness in philosophy, arts and the architecture much earlier. We want to trace its steps as far back as we can and look for the bridges between philosophy and mathematics. What was the philosophical mind-set that provided a fertile ground for such an invention?"

The doctrine of "sunyata" or "void," is one of the most profound contributions of philosophy from India, said Sundar Sarukkai, professor of philosophy at the National Institute of Advanced Studies in Bangalore.

"Its possible connection to the mathematical zero is also of great interest, and hopefully this kind of work will draw more students into studying and researching these philosophical and mathematical traditions, which ironically has been neglected within India itself," Sarukkai said.

Buddhist philosophical texts in the 3rd century A.D. have elaborate verses about emptiness, or "sunyata," in Sanskrit.

The Mayans also used an empty tortoise-like "shell shape" to depict zero before the Common Era, but Indian historians say that it did not seem to have influenced the global numeral systems. Arab merchants who encountered the zero in Indiacarried it to the West.

What is widely found in textbooks in India is that a mathematician and astronomer, Aryabhata, in the 5th century used zero as a placeholder and in algorithms for finding square roots and cube roots in his Sanskrit treatises.

Last year, his bronze bust was installed at the UNESCO office in Paris during a conference on zero.

The Indian origin of zero and the decimal system have always been a matter of immense national pride, immortalized in a Bollywood song in 1970 that Indians still sing at public events.

But experts say that much of the ancient Indian traditional knowledge was primarily oral, which makes it difficult to date zero's origin.

"The degree of sophistication with which Aryabhata presents the number of revolutions made by the planets clearly points to the fact that Indians had already evolved by then a working knowledge of zero and the place value system," said K. Ramasubramanian, an expert in ancient Indian mathematics at the Indian Institute of Technology in Mumbai.

During a recent Project Zero workshop in New Delhi, he said that an Indian scholar used the word "sunya," which is Sanskrit for zero, while enunciating an algorithm in a text dating back to the 1st century B.C.

But not everyone is holding their breath for a great new discovery.

Promoted
Listen to the latest songs, only on JioSaavn.com
"It is going to be a painstaking task that will require a lot of money. Our ancient manuscripts are scattered all over; some may even be abroad," Singh said. "They will have to make a concerted effort to decipher, date and sequence the manuscripts. But I doubt they will come out with anything definitive."

(This story has not been edited by NDTV staff and is auto-generated from a syndicated feed.)
Comments
ZeroThe ZeroDiscovered The ZeroIndian mathematician