Udit Singhal is the founder of Glass2Sand, a zero-waste ecosystem that addresses the growing menace of glass waste in Delhi. 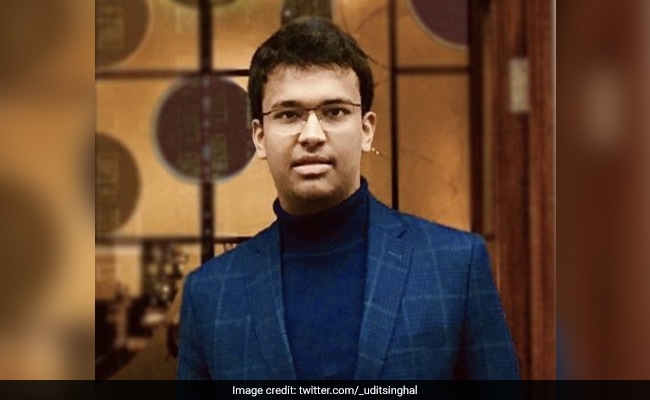 Udit Singhal has been named to Class of 17 Young Leaders for UN Sustainable Development Goals.

An 18-year-old from India, Udit Singhal, has been named by the United Nations to the 2020 cohort of young leaders for the Sustainable Development Goals, the highest profile recognition opportunity at the world body for youngsters who are leading efforts to combat the world's most pressing issues.

Mr Singhal has been named to the 2020 Class of 17 Young Leaders for the Sustainable Development Goals (SDGs). He is the founder of Glass2Sand, a zero-waste ecosystem that addresses the growing menace of glass waste in Delhi.

Through the initiative, empty glass bottles are prevented from being dumped into landfills, where they won't decompose for a million years, and are crushed into commercially valuable sand, the Office of the Secretary-General's Envoy on Youth said in a statement.

"As a Young Leader for the SDGs, I will be an active agent of change. I hope to be able to encourage communities to embrace a better civic sense to create sustainable living spaces - like when mountain-high landfills are detonated," Mr Singhal said in the statement.

According to Mr Singhal's profile on his website, the student at The British School in New Delhi conceived the Glass2Sand project in late 2018 when collection of bottles had become unviable for waste collectors due to dropping demand, because large storage spaces were needed and the transport costs were high.

Empty glass bottles were not segregated anymore and started to go for dumping in the landfills, the Glass2Sand website said, adding that Mr Singhal's initiative has stopped over 8,000 bottles from being dumped in landfills and produced 4,815 kilograms of high-grade silica sand so far.

"Despite being disproportionately impacted by COVID-19, young people around the world continue to demonstrate immense resilience, resourcefulness and leadership in finding innovative solutions to recover better and achieve the SDGs," she said.

The young leaders -- between the ages of 18 and 29 years old -- represent the diverse voices of young people from every region of the world, and are collectively responsible for activating millions of young people in support of the SDGs.

This group will come together as a community to support efforts to engage young people in the realisation of the SDGs both through strategic opportunities with the UN and through their existing initiatives, platforms and networks.

This year's Young Leaders for the SDGs include 22-year-old Mariama Djambony Badji of Senegal who is a young entrepreneur of green and smart architecture, 18-year-old Siena Castellon from Ireland who is an autism and neurodiversity advocate, 26-year-old Ilayda Eskitascioglu of Turkey who founded an initiative that aims to provide sanitary materials to rural women in the country, 23-year-old climate activist from Uganda Vanessa Nakate.

It also includes 21-year-old environmental engineer from Egypt Loay Radwan, 22-year-old deep-tech architect from Bangladesh Zahin Razeen and 28-year-old Ralf Toenjes from Brazil, who is the founder and CEO of two national organisations Renovatio, a non-profit, and VerBem, a social business with the mission to democratise the access of eye care in Brazil and internationally. Renovatio/VerBem has been able to supply more than 1,50,000 people with correct eye care and donate more than 60,000 eyeglasses to people in Brazil, Mozambique, Haiti, and India.

In 2017, UN Secretary-General Antonio Guterres appointed Wickramanayake of Sri Lanka as his Special Envoy on Youth and as the youngest senior official in the history of the organisation.