PAU Vice Chancellor Baldev Singh Dhillon in a letter to his counterpart in Pakistan, Muhammad Ashraf, sought suggestions to control the locust attack 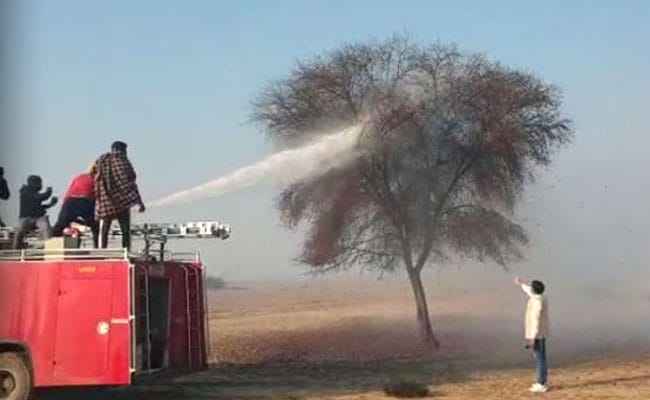 Firefighters spray water on a tree infested with locusts in Punjab

The Vice Chancellor of Punjab Agricultural University (PAU) has written to his counterpart at the University of Agriculture in Pakistan's Faisalabad for remedial measures to control a locust swarm attack in Punjab.

"As per recent reports of surveys conducted by the Locust Control Organization of India, the incursion of immature swarms/adults across the border is still continuing into India. So, I would like to know from your good self the current situation of the notorious pest in your country, Also, advice regarding the predisposing environmental/climatic factors which your university and Agriculture Department have identified," Mr Dhillon said in the letter.

Reports on infestation of desert locust have been coming from Jaisalmer, Barmer, Bikaner, Jalore, Jodhpur, Pali, Sirohi and Sriganganagar in Rajasthan, and Banaskantha and Bhuj-Kutch of Gujarat.

Similar incidents have been observed in areas in Punjab bordering Rajasthan.

In his reply, Mr Ashraf said the locust attack in Pakistan was unanticipated and it was expected to subside by mid-November. He blamed climate change for breeding of locusts in Pakistan.

"I would like to share with you that prolonged monsoon season favourable climatic conditions for its multiplication at Indo-Pak border. The university administration with the local government officials are constantly monitoring and carrying out the control operations," Mr Ashraf said in his reply.