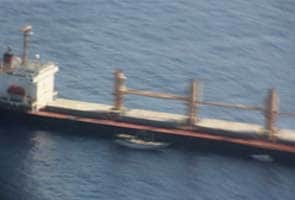 New Delhi: An attack by Somali pirates on a Chinese cargo ship with 24 crew members on board in the Arabian Sea was successfully thwarted by Indian naval warships and aircraft, which forced the brigands to abandon the attempt and flee, an officer said on Friday. The operation was carried out by the Indian maritime forces in coordination with the NATO and Chinese task forces on anti-piracy patrol in the Indian Ocean region, the Indian Navy officer said.

The Chinese-owned bulk carrier, MV Full City, came under siege from the pirates at 8.45 a.m. on Thursday about 450 nautical miles (850 km) west of Karwar in Karnataka.

The entire Chinese crew deftly locked themselves up in the merchant vessel's safe house, preventing their capture by the pirates, and sent out an emergency message.

On receiving the distress call, Indian Navy and Coast Guard ships patrolling in the vicinity rushed to its help, even as the navy's TU-142 maritime reconnaissance aircraft flew to the spot in 30 minutes and carried out several low passes over the merchant vessel, warning the pirates to abandon their attempt to hijack the Panama-flagged vessel.

With the aircraft crew warning the pirates over radio that Indian and NATO Task Force warships were closing in on MV Full City to carry out an operation, the brigands abandoned the vessel, boarded a skiff and rushed to a pirate mother vessel nearby, which fled from the site at full speed, the officer said.

"As there were no surface forces in the immediate vicinity to board MV Full City and sanitise the ship, the Indian naval aircraft circled overhead MV Full City for over three hours, assisting the rescue operation by coordinating with the NATO Task Force," the officer said.

The TU-142 aircraft finally left the area after over four hours only after ensuring that surface forces were within range to proceed with the boarding and sanitising operations.

"MV Full City was saved from getting hijacked by the very prompt action of the Indian naval aircraft," the officer added.

The operation to rescue the Chinese vessel was carried out by the Indian Navy and Coast Guard in coordination with the NATO Task Force, the Chinese Task Force and the Maritime Rescue Coordination Centre at Beijing, highlighting the international cooperation in the anti-piracy efforts in the Indian Ocean.

"The Chinese Task Force also thanked the Indian Navy for its prompt and persistent action leading to the pirate attack on MV Full City being repelled," the officer said.

MV Full City is now continuing its passage through the eastern Arabian Sea, with its safety assured by the sustained anti-piracy vigil being maintained by the Indian Navy and the Indian Coast Guard, the officer added.

The Indian Navy has, since January, sunk four pirate mother ships in the Arabian Sea, apart from capturing 120 brigands and jailing them in India.

Promoted
Listen to the latest songs, only on JioSaavn.com
With independent as well as collaborative efforts, the maritime forces have effectively checked piracy in the Arabian Sea in general and the eastern Arabian Sea in particular.