Women's access to education in India has improved vastly in the past three decades, but social change has been slower. 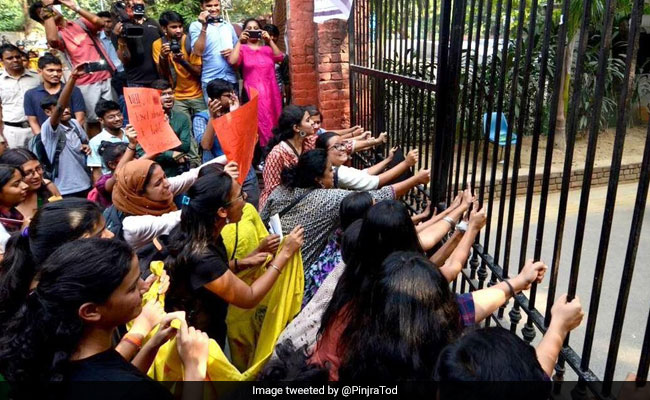 Protests by women's collective Pinjra Tod or "Break the Cage" against curfews.

Late one night in the fall, about 200 female students in Bhopal, a city in central India, held a rare demonstration on their college's basketball court. Their very presence there was an act of protest: Women were not allowed to be outside their dormitories after dark, just one of many restrictions on their movement.

They spent the night outdoors - the first time many of them had seen the moon since they began college, one student recalled.

For years, college campuses in India have regulated the movement of their female students in the name of safety. But in protests over the past several months, women on college campuses nationwide have voiced their demands: freedom from oppressive rules and equality with the male students. And slowly, colleges are responding. Protest by "Pinjra Tod"or Break the Cage at Delhi University against hostel curfew.

Women's access to education in India has improved vastly in the past three decades, but social change has been slower. Reported crime against women has doubled in the past 10 years, which experts say is a result of deeply embedded patriarchal attitudes that are also evidenced by the persistent preference for male children and the decline in the number of working women.

The recent protests were inspired by a Delhi-based women's collective, Pinjra Tod, or "Break the Cage," which campaigns against arbitrary curfews and rules imposed on female residents at colleges and universities - part of a broader battle by women's rights activists to take back public spaces and challenge the threat of sexual violence.

They're fighting not just the curfew but also "the idea of policing women and how they are kept in gendered spaces," said Joan Sony Cherian, a member of the collective.

Women in India this month have entered a temple that once banned female visitors of menstruating age and prompted the dismissal of a professor for comparing virgins to "a sealed bottle." Last year, dozens of women shared stories of sexual harassment at workplaces as part of a burgeoning #MeToo movement. Women carried out months of protest against the hostel curfew in Delhi University.

At Bhopal's Regional Institute of Education, which trains students to become teachers, the campus residences had strict rules for women. Female students had to be back in their dorm rooms by 5:30 p.m. in the winter, by 6:45 p.m. at other times. Leaving campus was allowed only between 1 to 6 p.m. on Saturdays. Food delivery was allowed only until 5:30 p.m.

If a woman wanted to leave campus for a longer period, her parents were required to fax the request, after which two sets of administrative signatures were required. Female students did not have access to the rooftop terrace. For the men on campus, most of these rules did not apply.

The women began their campaign with a sit-in, borrowing tactics and strategies developed by Break the Cage. Without their support, "our protest would not have been at this scale," said Rai, a participating student, who spoke on the condition of partial anonymity to avoid possible retaliation by the college.

On the third day of the protest, the administration relented. Now women don't have to return to campus until 8 p.m. and can remain outside their dorm rooms while on campus until 9 p.m. Later that week, a group of female students danced in a religious procession on campus in celebration. It was a new taste of freedom: Under the previous rules, they were locked in during festivals or could celebrate only in an enclosed space demarcated for them.

The protests weren't limited to Bhopal. They spread. In some instances, they were inspired by previous protests; others happened spontaneously. 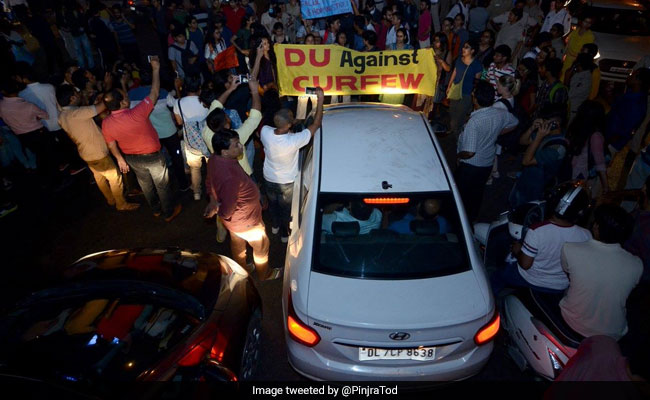 Protest outside colleges after new hostel rules for Delhi University was announced.

Female students at a branch of the Regional Institute of Education in Ajmer, a town in Rajasthan state, broke their curfew barely a week after the Bhopal protests. In October, students from Panjab University protested for 48 days. Protests led by Break the Cage at prestigious Delhi colleges such as Miranda House and Lady Shri Ram College soon followed.

Administrators at the government-run Regional Institute of Education declined to comment on the protests. Lady Shri Ram College, a branch of Delhi University, said that the college had introduced changes such as ending the requirement for female students to have local guardians. The new rules were announced just before the planned protest.

Pratibha Jolly, Miranda House principal, acknowledged that the old rules were "archaic and major reform was overdue." After last year's protest, the college made the curfew later and increased the number of nights a resident could stay out of the dorm.

"Our biggest challenge is to provide a safe, secure environment while nurturing liberal and progressive education for an extremely diverse student population," Jolly said. "This requires nuanced responses."

But members of Break the Cage reject the safety argument. Devika Shekhawat, a member of the group, said women are aware of the risks. "We want to change the spaces" rather than force women to change their behavior, she said. 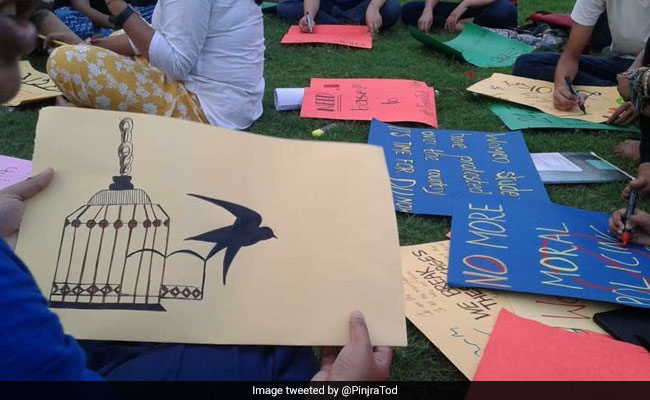 Protesters hold up posters that show a bird flying out of a cage in Delhi University.

Break the Cage has been advocating for women on campuses since 2015. While curfews have been central to its demands, it has also drawn attention to issues such as higher fees charged by dormitories for women, the lack of sexual harassment committees mandated by law, and moral policing of female students.

The solidarity offered by Break the Cage has made a difference, said Kanupriya, 23, the student union president of Panjab University, who goes by one name. She led a successful campaign to scrap the dorm curfew.

These successes alone will not bring about gender equality, Kanupriya said, but they are a way to move the needle: "This is about changing what is considered normal."