Organisers say over 50,000 people have registered for the event to be held at the NRG Stadium of the Houston Texans football team.

US President Donald Trump's decision to drop in at the 'Howdy, Modi' event in Texas, where Prime Minister Narendra Modi is scheduled to address Indian-Americans, reflects the "personal chemistry and friendship" between the two leaders, India's Ambassador to the US Harsh Vardhan Shringla said.

"The two leaders addressing the 'Howdy, Modi' event is historic and unprecedented. It reflects not only the closeness and comfort levels in the relationship but also the personal chemistry and friendship between Prime Minister Modi and President Trump," Mr Shringla was quoted as saying by news agency ANI.

On Sunday, the White House in a statement said  President Trump will attend the 'Howdy, Modi' event in Houston, Texas, on September 22. This will be the two leaders' third meeting this year; PM Modi and President Trump last met at the G7 Summit in France on August 26.

This would also be the first time that an American president would be addressing thousands of Indian-Americans at one place in the US.

Over 60 US lawmakers, including the first American-Hindu Congresswoman Tulsi Gabbard and Indian-American Congressman Raja Krishnamoorthi, will attend the event.

Organisers say over 50,000 people have registered for the event to be held at the NRG Stadium of the Houston Texans football team.

The gathering is "a great opportunity to emphasize the strong ties between the people of the United States and India, to reaffirm the strategic partnership between the world's oldest and largest democracies and to discuss ways to deepen their energy and trade relationship," the White House said in a statement. 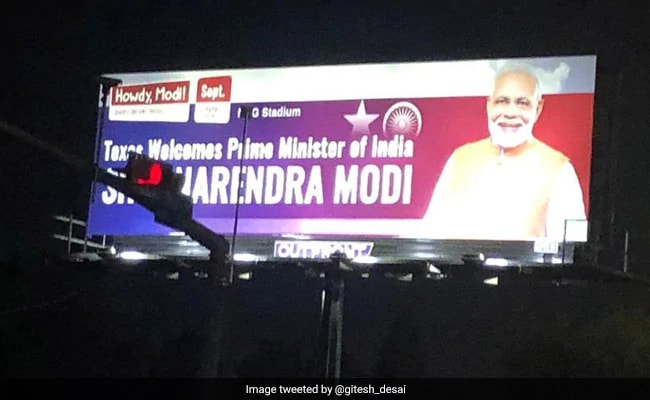 Huge digital billboards have come up on highways across Houston welcoming PM Modi for the diaspora event.

The summit, with the theme of "Shared Dreams, Bright Futures" will highlight the contributions of Indian-Americans in enriching the US for the last seven decades as well as the key role they have played in strengthening relations between the two nations.

President Trump attending the Texas event will send a strong signal of personal support to PM Modi at a time when several US lawmakers have expressed concerns about the restrictions in Jammu and Kashmir, which has gone on for over 40 days now.

However, some 84 per cent of Indian-Americans voted in 2016 for President Trump's rival Hillary Clinton, making them among the most Democratic-leaning ethnic groups, according to polling by the Asian American Legal Defense and Education Fund, news agency AFP reported.

During the 2016 presidential campaign, President Trump took part in a rally in New Jersey where he declared, awkwardly, "I love Hindu."

With inputs from ANI and AFP