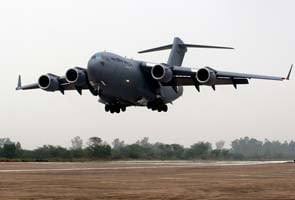 New Delhi: Bolstering the Indian Air Force's capability to swiftly transport combat troops and equipment such as tanks to the front, Defence Minister A K Antony will on Monday formally induct its biggest 70-tonne C-17 heavy-lift transport aircraft into service at the Hindon Air Base near Delhi.

Mr Antony will formally induct the aircraft procured from the US under a deal expected to be over Rs 20,000 crore into the newly-formed 81 'Skylord' Squadron in Delhi, IAF officials said.

The American C-17, with a capability to carry around 80 tonnes of load and around 150 fully geared troops, will replace the Russian Il-76 as the biggest aircraft in the IAF inventory till now.

The Il-76 had the capability to carry loads of up to around 40 tonnes.

The IAF has placed orders with the US for ten such aircraft under the deal signed in 2011 and three of them have already been delivered.

The US Air Force will complete the delivery of all the 10 aircraft by the end of next year.

The aircraft is expected to enhance the operational potential of the IAF with its payload carriage and performance capability and would augment the strategic reach during disaster relief or any similar missions.

After the completion of the 10 aircraft, the IAF may also exercise the option of procuring six more planes for its fleet.

In recent times, the IAF has shifted its dependence from the Russian-origin aircraft towards the American ones with the induction of the C-17 and the C-130J Super Hercules transport
aircraft.

Promoted
Listen to the latest songs, only on JioSaavn.com
The IAF operates six C-130Js and has plans of procuring six more for operations on small and unpaved runways alongside routine transport missions.

The IAF also has the Russian Antonov-32 in its inventory.