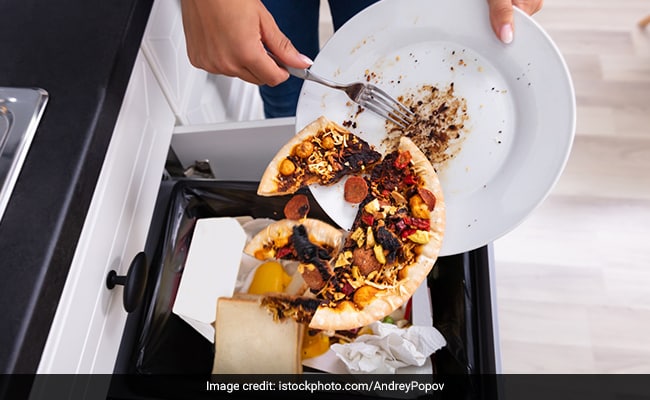 Household food waste in India is about 68.7 million tonnes a year, the report said (Representational)

An estimated 931 million tonnes of food were wasted globally in 2019, enough to circle the Earth seven times, according to a UN report which said that household food waste in India is about 68.7 million tonnes a year.

The Food Waste Index Report 2021, from the United Nations Environment Programme (UNEP) and partner organisation WRAP, said that around 931 million tonnes of food waste was generated in 2019, sixty-one per cent of which came from households, 26 per cent from food service and 13 per cent from retail.

"This suggests that 17 per cent of total global food production may be wasted," it said.

The report looks at food waste that occurs in retail outlets, restaurants and homes - counting both food and inedible parts like bones and shells and presents the most comprehensive food waste data collection, analysis and modelling to date.

It finds that in nearly every country that has measured food waste, it was substantial, regardless of income level.

It shows that most of this waste comes from households, which discard 11 per cent of the total food available at the consumption stage of the supply chain.

Food services and retail outlets waste 5 per cent and 2 per cent respectively.

On a global per capita-level, 121 kgs of consumer level food is wasted each year, with 74 kgs of this happening in households, the UNEP said in a statement.

"If we want to get serious about tackling climate change, nature and biodiversity loss, and pollution and waste, businesses, governments and citizens around the world have to do their part to reduce food waste," Executive Director of the UNEP Inger Andersen said.

The report said that food waste has substantial environmental, social and economic impacts. At a time when climate action is still lagging, 8-10 per cent of global greenhouse gas emissions are associated with food that is not consumed, when losses before consumer level are taken into account.

"Reducing food waste would cut greenhouse gas emissions, slow the destruction of nature through land conversion and pollution, enhance the availability of food and thus reduce hunger and save money at a time of global recession," Mr Andersen said.

The report noted that with 690 million people affected by hunger in 2019, an estimate that is expected to rise sharply due to the COVID-19 pandemic, and three billion people unable to afford a healthy diet, consumers need help to reduce food waste at home.

It said countries can raise climate ambition by including food waste in Nationally Determined Contributions to the Paris Agreement, while strengthening food security and cutting costs to households.

"For a long time, it was assumed that food waste in the home was a significant problem only in developed countries," said Marcus Gover, CEO of WRAP.

"With the publication of the Food Waste Index report, we see that things are not so clear cut. With only nine years to go, we will not achieve SDG 12 Target 3 if we do not significantly increase investment in tackling food waste in the home globally. This must be a priority for governments, international organisations, businesses and philanthropic foundations," Mr Gover said.

Sustainable Development Goal (SDG) target 12.3 aims at halving per-capita global food waste at the retail and consumer levels and reducing food losses along production and supply chains. One of the two indicators for the target is the Food Waste Index.

Mr Andersen said that there is growing evidence of success in reducing food waste - though not at the scale needed to achieve the target.

"Much more can be done. We need, for example, to address the role of consumer behaviour, in all cultural contexts, in achieving the target. Let us all shop carefully, cook creatively and make wasting food anywhere socially unacceptable while we strive to provide healthy, sustainable diets to all," Mr Andersen added.