S Jaishnakar on Saturday concluded the high-level United Nations General Assembly debate in New York. The EAM was in New York from September 18 to 24. 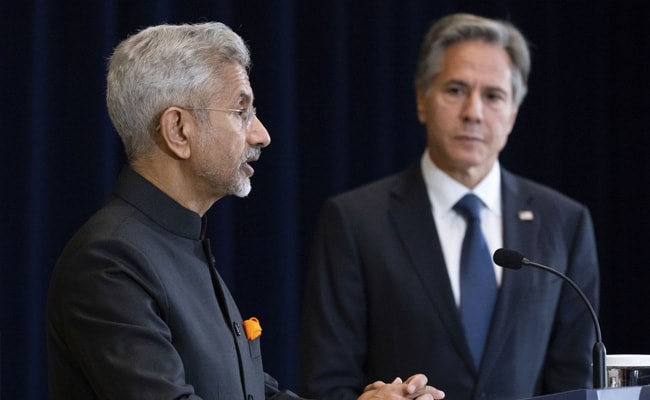 The bilateral relations between both countries are solid and positive, S Jaishankar said.

External Affairs Minister S Jaishankar during a press briefing on Wednesday said that the relationship between India and US today impacts the rest of the world as there are a lot of countries which look to the association individually and bilaterally and hope for solutions which the world is searching for in many aspects.

"I think our relationship today impacts the rest of the world. There are a lot of countries which look to us individually and bilaterally for some part of the betterment which they hope for solutions which the world is searching for in many respects," Mr Jaishankar said during the press briefing.

Referring to the bilateral consultations between the two countries as solid, positive and productive, Mr Jaishankar underscored that the visit was very comfortable and he had some very good conversations with the Ministers in the US.

He further added that the bilateral conversations were framed under the pretext of larger global challenges and there was a very high degree of convergence as the priorities of India and the US, at times, have been different.

"That's the sort of broad sense that I want to give you of a very solid, positive, productive bilateral conversation but framed in the context of larger global challenges where there was a very high degree of convergence on how we look at those challenges, we may articulate it a bit differently as we are oppositions and our priorities at some times will be different," Mr Jaishankar said in a statement during the briefing.

Describing the Washington visit as a comfortable one, the External Affairs Minister underscored that both the nations understand on how to make space for each other and work despite not entirely agreeing on every aspect of every issue.

"The good part of the relationship is today that we understand that we have to make space for each other and that we can work with each other even if we do not entirely agree on every aspect of every issue," said Mr Jaishankar.

Moreover, the EAM also held a conversation with the US Congress and the two sides had a good discussion on what was happening in the semiconductor industry and the ease of doing business in India.

Taking to Twitter, Mr Jaishankar wrote, "Appreciated meeting with senior members of US Congress who are committed to strengthening our partnership. Apprised them of recent progress in our cooperation. @RepBera @ChrisCoons @MarkWarner @RepMcNerney @ossoff"

S Jaishnakar on Saturday concluded the high-level United Nations General Assembly debate in New York. The EAM was in New York from September 18 to 24.

Notably, External Affairs Minister, Dr S Jaishankar, was welcomed by US Secretary of Defense Lloyd Austin to the Pentagon in an enhanced honour cordon ceremony on Monday.

Earlier on Tuesday, US Secretary of State Antony Blinken also noted that the partnership between India and United States is one of the most consequential in the world, during a joint press conference.

"The partnership between India and US is simply one of the most consequential in the world. It is to address any global challenge that our people face - health security, climate change, food security and upholding the free and open international order. Over the past years, we have made real progress in elevating that partnership bilaterally -- through institutions like QUAD and G20 and international organisations at the United Nations," Mr Blinken said.

He also noted that India and the United States have made real progress in elevating their partnership through institutions like QUAD and G20 and international organisations at the United Nations.