The three nations played a role in putting pressure on Pakistan to release Wing Commander Abhinandan Varthaman, who was captured during the aerial dogfight with Pakistan Air Force last month. 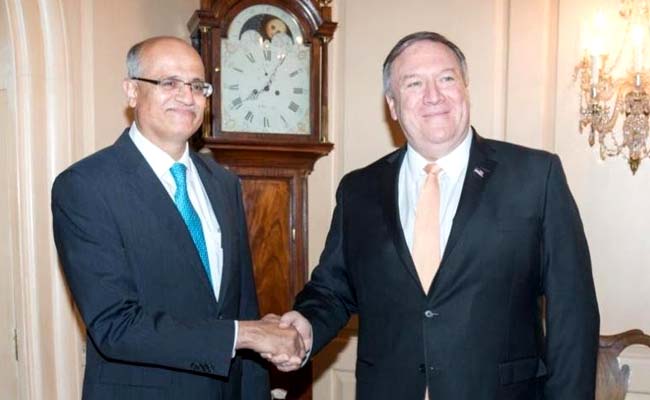 India and the US have agreed that Pakistan must take "concerted action to dismantle terror infrastructure and deny a safe haven to terror groups", the foreign ministry said today after a meeting between Foreign Secretary Vijay Gokhale and US Secretary of State Mike Pompeo. In Delhi, Prime Minister Narendra Modi today contacted Crown Prince of Abu Dhabi, Sheikh Mohammed bin Zayed Al-Nahyan and also met Saudi foreign minister Adel bin Ahmed Al Jubeir, who is on a visit to India.

The three nations played a role in putting pressure on Pakistan to release Wing Commander Abhinandan Varthaman, who was captured during the aerial dogfight with Pakistan Air Force last month.

"Foreign Secretary conveyed appreciation to the US Government and to Secretary Pompeo personally for the firm support that India received from the US in the aftermath of the terrorist attack in Pulwama, in the State of Jammu and Kashmir. He apprised Secretary Pompeo about recent developments in this regard," the foreign ministry said in a statement.

Mr Gokhale was in the US to attend a bilateral meeting with his American counterparts. During the meeting, he and Mr Pompeo agreed that those who "support or abet terror in any form should be held accountable", the foreign ministry said.

Collaboration on counter-terrorism has been a key part of US-India partnership and Washington's role in the release of Wing Commander Varthaman became clear after President Donald Trump told the world media from Hanoi that "reasonably attractive news was coming from India and Pakistan".

Saudi Arabia had publicly spoken about helping to de-escalate tensions after the Pulwama attack and Abu Dhabi's Crown Prince tweeted about "telephone calls to the Indian and Pakistani Prime Ministers", stressing the "importance of dealing wisely with recent developments and giving priority to dialogue and communication".

The foreign ministry today said PM Modi thanked the Saudi leadership for expressing solidarity with India in the fight against terrorism. The two nations have agreed to continue work for "irreversible, verifiable and credible steps against all terrorists without any discrimination," another ministry statement read.

The Saudi minister was in India to follow-up on the visit of the Crown Prince of Saudi Arabia, Mohammad bin Salman, last month. On way to Delhi, he had made a stopover at Islamabad, where he delivered a "special message" from the Crown Prince to Pakistani Prime Minister Imran Khan.

The ministry also said in their telephonic conversation, PM Modi and the Crown Prince of Abu Dhabi reiterated their commitment to consolidate bilateral and strategic partnership. PM Modi also thanked Crown Prince for the invitation extended to India to address OIC Foreign Ministers' Council as a Guest of Honour in Abu Dhabi.