India to Push Next Space Frontier, With Launch of Crew Module in mid-December 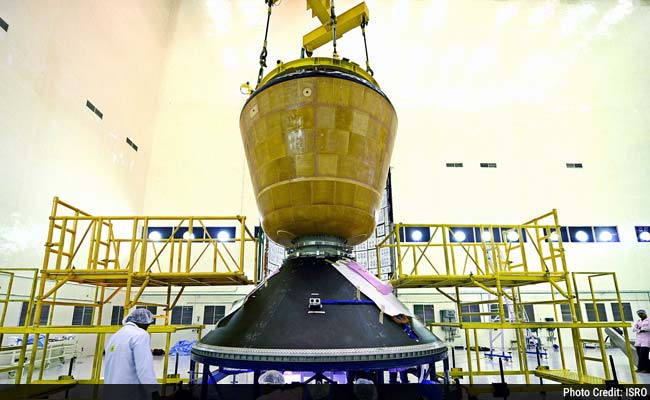 ISRO's crew module, named CARE, which will be launched on board the GSLV-Mark III in mid-December.

Sriharikota: Just months after achieving the milestone of a successful mission to Mars, India is set to push another frontier in space, by launching a human crew module and then retrieving it from the sea upon re-entry. The crew module will blast off from the Satish Dhawan Space Centre in Sriharikota, on board the GSLV-Mark III, which will be India's heaviest rocket till date.

The crew module will not carry any astronauts on its first test flight, which is scheduled between December 15 and 20. After rising more than a hundred kilometres into space, the crew module would be brought back to Earth, and its reentry trajectory will be studied. The capsule will then be recovered using Indian coast Guard ships from close to the Andaman Nicobar islands. A simulated recovery was carried out recently in the region.

The crew module will be launched as a payload on the GSLV-Mark III, which will blast off for the first time. The flight would be a sub-orbital test flight, and will see the first two stages being fired. The third stage, which is cryogenic, is still under development and would not be tested. However, the launch vehicle would carry a dummy cryogenic stage.

Till date, only Russia, America and China have the capability of flying astronauts into space. Once the government gives a final go-ahead for this ambitious rupees 12500 crores human space flight endeavor by ISRO, India will be able to notch another significant achievement in space exploration.

ISRO says it can fly an astronaut within seven to eight years of the govt giving its final go-ahead. The only Indian to have gone into space is astronaut Rakesh Sharma, who flew aboard the Soyuz space capsule in 1984.

The flight of the GSLV-Mark III will also be monitored by ISRO scientists, for its flight parameters, its behaviour as it moves through the atmosphere and its stability.

"The rocket can carry up to four tonne payload. This is the heaviest rocket India has ever launched. It is 630 tonne at lift off. We would test only the first two stages and not the cryogenic stage," explained S Somanath, Project Director, GSLV Mark III.

The cup cake-shaped crew module is 2.5 metre tall and 3.5 metre in diameter."The three tonne weighing crew module would use four set of parachutes to safely land on the surface of the sea at 7 metre per second. It will land some 180 km from Indira Point of Andaman and Nicobar Islands. From the lift off to the crew module splashing into the sea, it will take around 20 minutes," said S Unnikrishnan Nair, Project Director of the Crew Module programme.

Promoted
Listen to the latest songs, only on JioSaavn.com
The capsule, tentatively designed to carry three astronauts, would be recovered by Indian Coast Guard ships. A practice of the recovery was done on October 31 with Coast Guard ship ICGS Samudra Paheredar, he added.