"Prices Will Go Up If Russian Oil Is Off Market": Minister To CNN On India's "Moral Duty"

"India will respond according to its supreme national interest," says Hardeep Puri on dealing with Russia despite its aggression on Ukraine 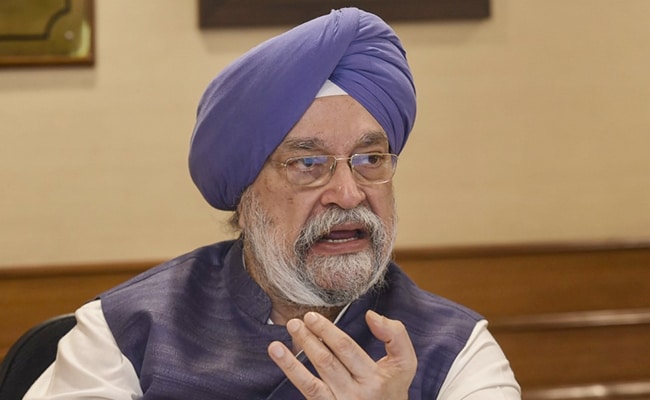 Union Minister Hardeep Singh Puri has said there is no moral conflict, “absolutely none”, in India's purchase of oil from Russia, which is facing condemnation over its ongoing war on Ukraine.

“We owe a moral duty to our consumers,” Mr Puri said in an interview with CNN at Abu Dhabi, citing India's population of 1.3 billion.

“We don't feel any pressure. [Narendra] Modi's government doesn't feel the pressure. We are the fifth largest economy in the world,” he further said during the interview, “India will respond according to its supreme national interest."

To a pointed question if there was moral conflict in buying from Russia, he said, “Absolutely none; absolutely none. There is no moral conflict. We don't buy from X or Y; we buy whatever is available... I don't do the buying. The government does not do it. Oil companies do."

"Absolutely none. There is no moral conflict."

I asked India's Minister of Petroleum @HardeepSPuri whether there was any moral conflict around his country's importing Russian oil, he tells me without Russian oil, prices will only go up. pic.twitter.com/Q6fZ4iN5bX

India has not expressly taken sides at the UN on the Russia-Ukraine conflict, but it has stressed a moral position against war — which PM Modi has conveyed to President Vladimir Putin too.

On the oil front, India and China now account for over half of all Russia's exports; both cashing in on discounts as some Western countries shun Moscow over its invasion of Ukraine.

In September, Russia's share in India's oil imports surged to an all-time high of 23 per cent from 19 per cent the previous month — since April, there's been a 50-fold surge, reported news agency Reuters. The share of Middle East oil declined a little, to about 56 per cent.

Before the war began, Russian oil was just 0.2 per cent of oil imported by India. Mr Puri stressed this, adding, “We buy in a quarter what Europe buys in an afternoon.”

He acknowledged that now Russia is “one of the top four or five" suppliers to India. He pointed out that India's largest oil supplier last month was Iraq.

Prices will go up if no one buys Russian oil, Mr Puri stressed. “If prices increase, there will be inflation and recession.”

Asked what if the European Union or US were to ask India to restrict oil import from Russia, he said, “You should address this question to the EU or US.” He refused to answer what he termed hypothetical questions about plans of the G-7 to impose further sanctions on Russia.

The G7 group of nations (UK, US, Canada, France, Germany, Italy and Japan) has been speaking of capping the price of oil from Russia to limit its revenue, but there's nothing concrete on that yet.

India will “examine” if there is any proposal, Mr Puri said.

Last month in the US too, Mr Puri took the same line of argument, stressing the Indian government's "moral duty to provide energy to its citizens".