The Indian delegation is being led by Ajay Bisaria, the High Commissioner expelled by Pakistan and Vijay Thakur Singh, Secretary East, who is addressing the gathering.

Pakistan, which has been making unsuccessful attempts to flag Kashmir at various international forums, today claimed at the UN Human Rights Council that it should investigate the situation in Jammu and Kashmir and highlighted the arrests of political leaders in the state. Pakistan foreign minister Shah Mehmood Qureshi even cited a "nuclearised" Southeast Asia.

India has always said that Kashmir is a bilateral issue and told the international community that the changes made in the status of Jammu and Kashmir is an internal matter, which most nations have accepted.

The Indian delegation today is being led by Ajay Bisaria, the High Commissioner expelled by Pakistan as part of a five-point plan to downgrade ties with India, and Vijay Thakur Singh, Secretary East, who is addressing the gathering.

Here are the Live Updates of India's statement at the UN:

We have heard the High Commissioner's oral update. India is an ancient civilization with immense and rich diversity. It also holds the credentials of being the world's largest democracy. Earlier this year, the world was witness to the biggest democratic exercise in human history, involving 900 million Indian voters and over a million polling stations. Our commitment to democracy is unshakable, and this is appreciated globally.

Our Constitution is supreme and guarantees fundamental rights to all our citizens, without any distinction. It secures justice, liberty and equality and promotes fraternity among all. Our belief in our secular polity is unflinching.

Our independent judiciary is the guardian of these fundamental rights and liberties.

Our free media, vibrant civil society and the impartial human rights institutions provide an effective framework for protection of human rights of all sections of society.

Our Parliament has been adopting a series of progressive legislations. The human rights institutions have been further strengthened in consonance with the Paris Principles.

The Government is taking affirmative actions to promote socio-economic equality and justice for the underprivileged sections of society in the spirit of its motto of "Sabka Saath, Sabka Vikas, Sabka Vishwas" - which means We will carry everyone with us and leave no one behind.

The recent legislative measures taken by India within the framework of its Constitution will ensure that these progressive measures will also be fully applicable to our citizens in Jammu & Kashmir and Ladakh. As a result, there will be an end to gender discrimination, including on property rights and local bodies representation. There will be better protection of juvenile rights and laws against domestic violence. The rights to education, information and work will now be applicable. Longstanding discrimination against refugees and under privileged sections will end. These decisions were taken by our Parliament after a full debate that was televised and enjoyed widespread support. We wish to reiterate that this sovereign decision, like other legislations passed by Parliament, is entirely internal to India. No country can accept interference in its internal affairs, certainly not India.

Despite challenging circumstances, Jammu & Kashmir's Civil Administration is ensuring basic services, essential supplies, normal functioning of institutions, mobility and nearly full connectivity. Democratic processes have been initiated. Restrictions are being eased continuously. Temporary preventive and precautionary measures were necessitated to ensure safety and security of our citizens in the face of credible threats of cross-border terrorism.

Today, terrorism poses a grave challenge to the commitment of the international community to protect the right to life and security of people globally. It is extinguishing innocent lives and spreading fear and uncertainty. Those who abet, finance and support terrorism in any form on territory under their control are in truth the worst violators of human rights. The world, in particular India, has suffered greatly on account of the activities by practitioners of state sponsored terrorism and it is time to collectively take decisive and firm action against terror groups and their abettors who threaten the fundamental human right to life. We must speak out. Silence only emboldens terrorists. It also encourages their intimidatory tactics. India appeals to the international community to work together in the fight against terrorism and their sponsors.

India firmly believes in a constructive approach to shape the human rights discourse in the Council. We need to find practical measures to protect and promote economic, social and cultural rights of the people globally.

We should call out those who are misusing this platform for malicious political agendas under the garb of human rights. Those who are attempting this speak on the human rights of minorities in other countries whilst trampling upon them at will in their own country. They cry victim when they actually are the perpetrators.

One delegation has given a running commentary with offensive rhetoric of false allegations and concocted charges against my country. The world is aware that this fabricated narrative comes from the epicentre of global terrorism, where ring leaders were sheltered for years. This nation conducts cross-border terrorism as a form of 'alternate diplomacy'. My delegation will separately exercise the right to respond.

On the National Register for Citizens. It is a statutory, transparent, nondiscriminatory legal process mandated and monitored by the Supreme Court of India. Any decision that is taken during the process of its implementation will comply with Indian Law and will be consistent with India's democratic traditions.

In conclusion, I reiterate that as a responsible member of the international community, India firmly believes in a constructive approach to promote and protect human rights. We believe that human rights are best protected when national institutions are strengthened. We do so as a nation of 1.3 billion people, which embodies the highest principles of democracy, tolerance and unity in diversity. India takes this opportunity to reaffirm its commitment towards meaningful engagement with the Council for promotion and protection of human rights everywhere.

I thank you for your attention.

Sep 10, 2019 20:01 (IST)
India on Assam NRC at UN Rights body:
On the Assam Citizens' List, India said, "NRC is a statutory, transparent, nondiscriminatory legal process mandated and monitored by Supreme Court of India. Any decision that is taken during its implementation will comply with Indian Law and will be consistent with India's democratic traditions.
Sep 10, 2019 20:00 (IST)
India Rebuts Pakistan at UN rights body. Watch:

Secy (East) MEA at UNHRC: We wish to reiterate that this sovereign decision, like other legislations passed by Parliament, is entirely internal to India. No country
can accept interference in its internal affairs, certainly not India. https://t.co/2e3WCSL6Zx

Sep 10, 2019 19:57 (IST)
One delegation (Pakistan) has given a running commentary with offensive rhetoric of false allegations  and concocted charges against my country. World is aware that this fabricated narrative comes from epicentre of global terrorism, where ring leaders were sheltered for years: India attacks Pakistan at UN rights body meet.
Sep 10, 2019 19:56 (IST)
As a result of recent legislative measures progressive policies will now be fully applicable to our citizens in Jammu and Kashmir and Ladakh. These will end gender discrimination,better protect juvenile rights&make applicable rights to education, information and work: India at UN human rights body meet
Sep 10, 2019 19:55 (IST)
Secretary (East) MEA, Vijay Thakur Singh in Geneva on Jammu and Kashmir: My Government is taking affirmative action by adopting progressive policies to promote socio-economic equality and justice.
Sep 10, 2019 19:44 (IST)
Scrapping Article 370 was a parliamentary decision in a bid to end discrimination: India at UN rights body meet.
Sep 10, 2019 19:42 (IST)
"False Allegations", India Rebuts Pak at UN Human Rights Body
Pakistan is using "fabricated narrative and false allegations", says India at UN Human Rights Council after Pakistan claims of atrocities in Jammu and Kashmir. 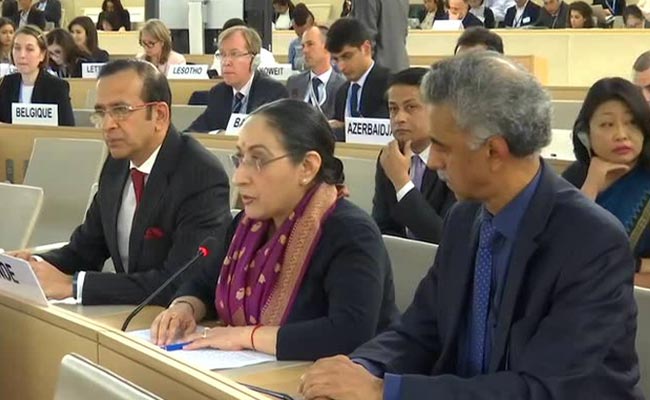