According to India's UN envoy a total of 72 million household toilets had been constructed to make the country open defecation free by October 2, 2019. 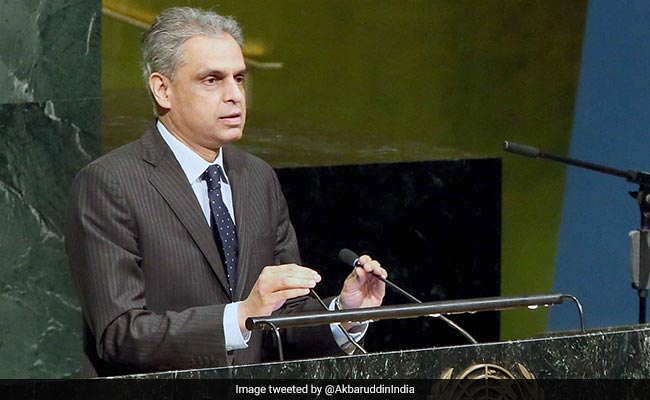 India is "pushing ahead" on its national efforts to meet Sustainable Devolvement Goals by undertaking one of the highest rates of renewable energy expansion and building 11 million homes under the world's largest affordable housing programme, India's top envoy to the UN Syed Akbaruddin has said.

"Our rapidly transforming world is pluralist and diverse but all our people have common aspirations for better lives," Mr Akbaruddin said.

He said the country was "pushing ahead" on the Sustainable Devolvement Goals (SDGs) with strong political commitment and execution by all stakeholders.

Highlighting the efforts underway in India in pursuit of SDGs, Mr Akbaruddin said under the Clean India Mission (Swachh Bharat), a total of 72 million household toilets had been constructed to improve hygiene and make the country open defecation free by October 2, 2019.

Through this campaign, 550 million lives will be directly impacted he said, adding that India will host Mahatma Gandhi International Sanitation Convention in October this year to share and learn from global experiences on this issue.

He also said India is undertaking the transformation of its energy mix towards renewable energy, with particular emphasis on expanding the use of solar and wind power, including off-grid.

"The rate of expansion in this sector in India is highest in the world," he said.

India has also partnered with France and other countries to launch the International Solar Alliance as a tangible contribution to the ongoing collective global efforts on climate action.

More than 60 countries have already joined this Alliance, which has now been registered at the UN as a multilateral treaty.

Further, by the year 2030, 600 million Indians will be living in urban areas and this will require building of 700-900 million sqm of urban space annually.

Stressing that this new urban infrastructure will be green and resilient, Mr Akbaruddin said India hopes to complete the building of 11 million homes by 2019 in what is the world's largest affordable housing programme.

He said with more than 110 Member States likely to complete their Voluntary National Reviews (VNRs) by the end of this year's forum, nations would have truly moved from the "phase of 'Precept' to the stage of 'Practice', from the era of preaching to the era of sharing, understanding and learning".

"The numerous examples of translating words into deeds in myriad ways demonstrate both 'small is beautiful' and 'big too is bountiful'," he said.

He said that strengthening global partnerships were key to accelerating global progress on the implementation of SDGs, noting that India was stepping up its efforts towards South-South cooperation.

Last year, India established the India-UN Development Partnership Fund under which USD 150 million has been committed for the next decade.

India is also partnering the UN Office for South South Cooperation in administering this Fund, with implementation by UN agencies.

Mr Akbaruddin also informed the forum that more than 20 projects are in various stages of implementation of this "start up" venture.