Read inOther Languages
This Article is From Oct 24, 2019

The Kartarpur corridor will connect the Dera Baba Nanak shrine in Punjab with Darbar Sahib at Kartarpur in Pakistan, just about four km from the International Border. 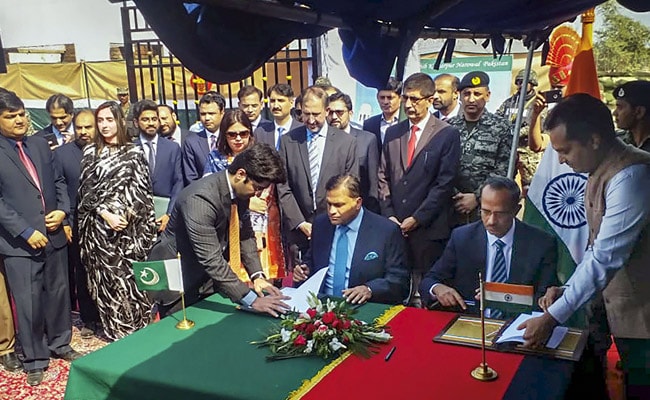 The signing of the agreement removes a key legal hurdle for the opening of the Kartarpur corridor.

India signed an agreement on the Kartarpur corridor with Pakistan today to allow Indian Sikh pilgrims to visit the holy Darbar Sahib in Pakistan. Indian officials met Pakistan officials at Zero Point near near Dera Baba Nanak in the border town of Gurdaspur to ink the memorandum of understanding.

The signing of the agreement removes a key legal hurdle for the opening of the corridor.

The corridor will connect the Dera Baba Nanak shrine in Punjab with Darbar Sahib in Kartarpur, just about four km from the International Border, located at Narowal district of Pakistan's Punjab province.It is the place where the founder of Sikhism Guru Nanak Dev is believed to have spent the last 18 years of his life.

"Indian pilgrims of all faiths and persons of Indian origin can use the Kartarpur corridor. The travel will be visa-free. Pilgrims need to carry only a valid passport," CL Das, Joint Secretary (Internal Security), said after the signing of the agreement.

"The Pakistan side has agreed to make sufficient provision for langar and distribution of prasad in the Gurdwara premises. On our side, all the required infrastructure, including the highway and the passenger terminal building are nearing completion for timely inauguration of the corridor," the top officer added.

New Delhi and Islamabad had earlier fixed October 23 as the date for signing the agreement aimed at ensuring visa-free travel for Indian pilgrims to the Gurdwara Darbar Sahib through the four-kilometre border corridor. The first such pilgrimage to the religious site is expected to be undertaken on November 9.

Under the agreement, the pilgrims would come in the morning and return in the evening after visiting Gurdwara Darbar Sahib. At least 5,000 pilgrims will be allowed to visit the holy site every day without a visa.

India maintains that both sides are in agreement over all issues related to the Kartarpur corridor, except for a $20 service charge Pakistan intends to impose on Sikh pilgrims. Disagreement over the issue even led to a delay in launching online registration for pilgrims intending to visit the shrine.

The service charge, expected to help Pakistan rake in over Rs. 21 crore each month, had become the reason for some heartburn in India. The fee was opposed by Punjab Chief Minister Amarinder Singh as well as Union Minister Harsimrat Kaur Badal, with both claiming that it could dash the dreams of less fortunate Sikh devotees in India.

The foundation stone for the Kartarpur corridor on the Indian side was laid in Punjab's Gurdaspur district by Vice President M Venkaiah Naidu last November.