Sushma Swaraj said India doesn't make its foreign policy under pressure from any other country. 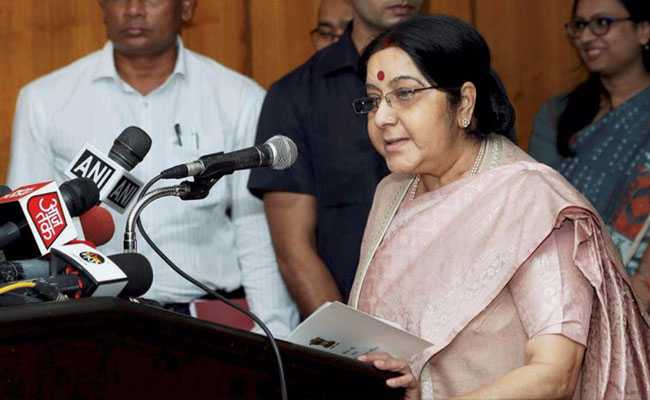 New Delhi: Responding to a question on whether the sanctions imposed by the United States on Iran and Venezuela will affect India's oil imports from the two countries, External Affairs Minister Sushma Swaraj on Monday said that India only recognises sanctions imposed by United Nations.

"We only recognise UN sanctions. We do not recognise any country-specific sanctions," Ms Swaraj said on Monday in a press-conference.

The United States had pulled out from the 2015 Iran nuclear deal in which the country had agreed to stop its sensitive nuclear activities in return for the lifting of crippling economic sanctions.

The US President Donald Trump announced his decision, reimposing the sanctions against Iran, which had been lifted after the deal with former President Barack Obama.

The US had also announced more sanctions against Venezuela, following re-election of President Nicolas Maduro.

Iran is India's third largest oil supplier. Venezuela is also one of the major suppliers of oil to India.

Ms Swaraj also ruled out using cryptocurrency in oil trade with Venezuela, saying the Reserve Bank of India had banned it.

Her comments came hours before a meeting with Iranian Foreign Minister Mohammad Javad Zarif who is here to seek India's support to salvage the nuclear deal.

Promoted
Listen to the latest songs, only on JioSaavn.com
China, Russia and several European nations have been trying to save the deal.