In their wide-ranging talks, the two leaders also underlined that connectivity initiatives must be based on internationally recognised norms and standards, rule of law, and inclusiveness, seen as an oblique reference to China's Belt and Road Initiative. 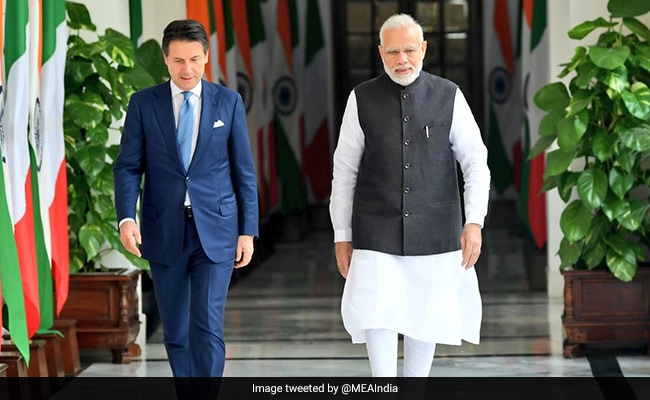 Prime Minister Narendra Modi and his Italian counterpart Giuseppe Conte Tuesday agreed to expand bilateral cooperation in areas of defence, trade, energy and infrastructure even as they condemned those providing safe havens to terror groups and supporting cross border terrorism.

In their wide-ranging talks, the two leaders also underlined that connectivity initiatives must be based on internationally recognised norms and standards, rule of law, and inclusiveness, seen as an oblique reference to China's Belt and Road Initiative.

Referring to defence cooperation, it said both sides recognised the need to broad base defence ties and make them "enduring and mutually beneficial".

Italy has been pushing for strengthening of bilateral defence ties which were hit by the AgustaWesland choppper scam, being investigated by Indian probe agencies.

In 2014, the UPA government had cancelled the chopper deal with AgustaWestland following allegations that the company bribed middlemen to secure the deal. The AgustaWestland is wholly owned subsidiary of Italian defence major Leonardo, formerly known as Finmeccanica.

"India invited Italian defence equipment manufacturing companies to invest in India under the Make-in-India initiative and to collaborate with Indian companies for design and construction of defence equipment," the joint statement said.

To boost bilateral trade and investment, both sides agreed agreed to set up a fast track mechanism to promote two-way investments, and resolve issues, if any, confronted by the businesses in each other's country.

The two also touched upon ongoing efforts of both sides to re-engage actively towards an early resumption of negotiations for a comprehensive, balanced and mutually beneficial India-EU free trade agreement.

The joint statement said PM Modi and Mr Conte discussed various global challenges including threat of terrorism and ways to deal with these.

"The leaders asserted that strong measures need to be taken against terrorists, terror organisations and all those who encourage, support and finance terrorism," it said.

They condemned all kinds of State support to terrorists including cross border terrorism, seen as a reference to Pakistan.

"The leaders agreed to strengthen counter-terrorism cooperation through multilateral fora and called upon all UN member countries to effectively implement the UN Global Counter Terrorism Strategy, UNSC Resolution 1267 and other relevant UNSC resolutions," it said.

In the talks, the Indian side proposed to host the second India-Italy joint working group on combating terrorism here at a mutually convenient date in the first half of 2019.

However, they "underlined that connectivity initiatives must be based on internationally recognised norms and standards, good governance, rule of law, inclusiveness, openness, transparency and equality".

Under its massive Belt and Road Initiative (BRI), China plans to build rail, maritime and road links from Asia to Europe and Africa in a revival of ancient Silk Road trading routes.

India has been opposing the project as a portion of the corridor passes through Pakistan-occupied Kashmir. India has been maintaining that mega connectivity project must respect sovereignty and territorial integrity of the nations.

The statement said the two leaders also resolved to fight all forms of protectionism, including unilateral measures and unfair trade practices.

"Leaders underlined the importance of implementing and enforcing obligations under the WTO by its members, including the ongoing work to implement its Trade Facilitation Agreement,"it said.