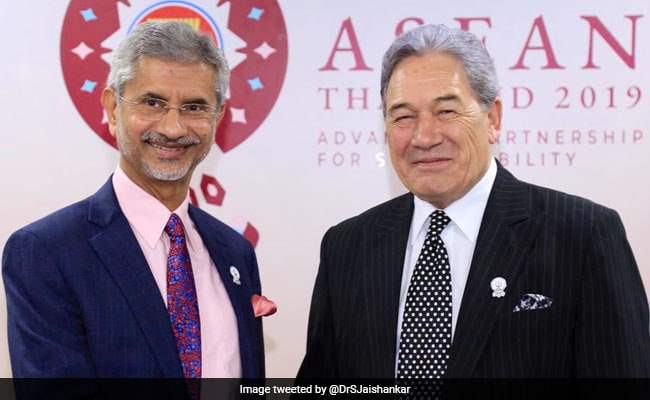 New Zealand Deputy Prime Minister Winston Peters, in India to promote bi-lateral trade, was asked Friday morning how his country had recovered from the Christchurch mosque shootings in March last year, and if he had a chance to discuss and assess the situation in Delhi, where violence over the controversial citizenship law has killed 42 people and injured hundreds.

"For us, it was new and from the time it happened we knew our country would never be the same again. But it happened by an outsider and I suppose the real issue we are talking about is how we harness new technology and how information is shared... where it is not a vehicle for terrorists, whatever the shape, form or background," Mr Peters, who is also his country's Foreign Minister, said.

"It is a freedom issue and as we have made it very clear, freedom is a magnificent concept but it is not the license to do as you please. That will be the trick, to get the balance where freedom of speech and liberty is paramount but abuse and misuse is not," he added.

New Zealand Trade Minister David Parker, who was also part of the delegation, said the attack had been a tragedy but he was proud of the way the country responded to it.

"The tragedy we suffered in the terrorist attack is a stain upon our country. It was a real shock (but) we are very proud of the way our country saw it as an attack against all of us rather than those targeted," he said, adding "The Prime Minister (Jacinda Ardern) handled it very well".

New Zealand's response to the tragic shootings was universally applauded, as was Prime Minister Ardern's reaction; she made personal visits to families affected by the attack and immediately set about buying back firearms from citizens to prevent future such disasters.

"Given that it was an attack by a white supremacist, our foreign minister went to other countries to explain our reaction to it. We are trying to heal as a country and doing our best to reinforce a pluralist vibrant democracy," he added.

Speaking at a gathering at the Bombay Stock Exchange, Mr Peters said: "The reality is the Indian people have a fierce belief in a thing called freedom and it shows in this country of 1.3 billion people, the biggest democracy in the world".

"It must be difficult to do what India is doing. Someone said democracy is a very bad form of government, except all the rest are so much worse. So really we should be proud of our democracy," he added.

Meanwhile, speaking on expansion of trade, Mr Peters said: "New Zealand is seriously committed to investing more in India. We know we are a small country but there's no reason why a small country cannot be of great help to a big one and vice versa".

According to the New Zealand government, total two-way trade in 2019 (till September) was $2.64 billion, with India exporting over $750 million in goods and services.

"We have shared security interests and in subjects like health and environment we will need each other. When we realise this, we can make our relationship work better," he said.