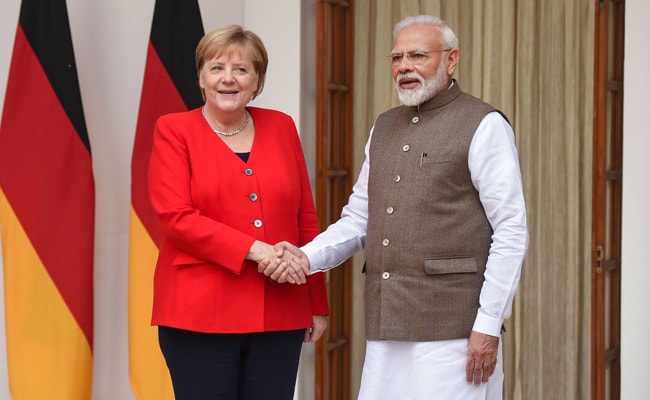 Will strengthen bilateral cooperation to deal with dangers such as extremism, said PM Modi

The two leaders, who co-chaired the fifth Inter-Governmental Consultations (IGC), also called on nations to ensure that their territory is not used for terror activities against other countries, in a veiled message to Pakistan.

Asked if the leaders discussed the situation in Kashmir, sources said it was not raised during the IGC. The PM Modi-Angela Merkel meeting comes amidst concerns expressed by some foreign lawmakers, including from the US, over restrictions imposed by the government post abrogation of Article 370 to withdraw Jammu and Kashmir's special status in August.

"We will strengthen bilateral and multilateral cooperation to deal with dangers such as terrorism and extremism," PM Modi said in a statement at a joint media event with Angela Merkel.

It also called upon all countries to work towards rooting out terrorist safe havens and infrastructure, disrupting terrorist networks and financing channels and halting cross border movement of terrorists.

Underlining the need for all countries to ensure that their territory is not used for terror activities against other countries, the two leaders stressed the importance of the combined effort of all countries to fight global terrorism and to send out a consistent message that terrorism in all its forms and manifestations is not acceptable to the international community.

They also called for the finalisation and adoption of the Comprehensive Convention on International Terrorism (CCIT) in March 2020.

He also hailed the strengthening of "far-reaching and strategic cooperation" between India and Germany in every field, especially in new and advanced technology.

In her remarks, Angela Merkel said that when it comes to 5G and Artificial Intelligence, they were a challenge and the two countries could cooperate closely on these.

Pitching for intensifying of trade ties, Ms Merkel said, "We know that our economic relations have increased but it could be intensified even more."

"Make In India is an endeavour we have understood since India was the host country at the Hannover fair, we seen that you are serious about this goal," she said.

"In 2022, Independent India will be 75 years old. We have aimed to build a New India by then. The capabilities of technological and economic power houses like Germany will be useful for India's priorities and needs in this multi-disciplinary effort," he said.

"Therefore, we have laid special emphasis on increasing cooperation in areas like new and advanced technology, artificial intelligence skills, education and cyber security," he said, adding it has also been decided that new possibilities of cooperation in e-mobility, fuel cell technology, smart cities, inland water ways, coastal management, cleaning of rivers and environmental protection will be explored.

"Our cooperation in these areas will also help in joint efforts against climate change," he said.

Expressing concern over the inadequate global level of climate action currently, the leaders called on all countries to step up their efforts.

"Germany and India stress the need to undertake climate actions based on the principles of equity, and common but differentiated responsibilities and respective capabilities, in the light of different national circumstances and agree to work towards further developing their respective NDCs as agreed in Paris," the statement said.

Recognizing the importance of India and Germany for a successful global energy transition to ensure the achievement of the long-term targets of the Paris Agreement as well as the SDGs in 2030, both leaders expressed satisfaction about the cooperation in the field of renewable energy and energy efficiency, including the important and successful work under the Indo-German Energy Forum (IGEF), Indo-German Development Cooperation as well as under the International Climate Initiative.

Five joint declarations of intent were also exchanged between India and Germany on consultations for the period 2020-2024 -- cooperation on strategic projects, partnership for green urban mobility, research & development on artificial intelligence, and cooperation in the field of prevention of marine litter.

India and Germany will continue cooperation to expedite reforms in UN Security Council, Modi said.
Merkel said agreements signed between Germany and India prove that ties are marching ahead in the areas of new and advanced technology.

"We will be happy to engage in big infrastructure projects which India is envisaging," she said.

Later, PM Modi tweeted, "Today's talks with Chancellor Merkel were extensive and fruitful. We reviewed the full range of India-Germany relations. Chancellor Merkel has distinguished herself as one of the most widely respected world leaders" and also described her as a "great friend" of India.