Agreements in the field of education, environment, urban development and railways were also signed in the presence of the two leaders. 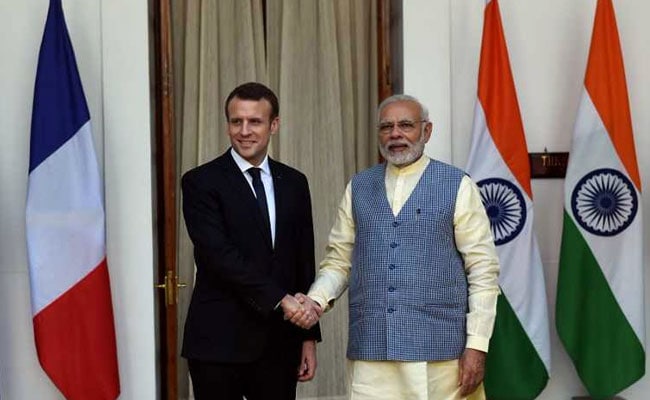 Both the leaders also talked about cooperation in the Indo-Pacific region.

New Delhi: In a major expansion of strategic ties, India and France today inked 14 pacts in key areas of defence, security, nuclear energy and protection of classified information besides resolving to deepen cooperation in the Indo-Pacific region and step up joint efforts to contain terrorism.

The agreements were signed after extensive talks between Prime Minister Narendra Modi and French President Emmanuel Macron, including on the changing security dynamics in the Indian Ocean and Pacific.

The visiting leader asserted that the sea lanes cannot be places for hegemonic power play, in a clear reference to China.

The pacts included reciprocal logistic support between the armed forces of the two countries and another on protection of classified or protected information, an agreement that comes in the backdrop of the Indian government refusing to divulge details of the multi-billion dollar Indo-French Rafale fighter jet deal.

"Our defence cooperation is very strong and we consider France among the most trusted defence partners," PM Modi said at a joint media event with Macron.

He said that the pact on reciprocal logistic support between the armed forces was a "golden step" in defence relations.

PM Modi said that both sides have agreed to strengthen cooperation in ensuring freedom of navigation, overflight as Indian Ocean will play a key role in ensuring regional peace and stability.

Noting that defence cooperation between the two countries now has a "new significance", Mr Macron talked about the Scorpene submarine project for the Indian Navy and the fighter jet deal for the Air Force.

"India had made a sovereign decision in this respect (Rafale fighter jet) and we are monitoring the progress in the field. We very much want to continue the programme. It is a long-term contract which is mutually beneficial. I personally consider it as the heart of the strategic partnership," Mr Macron said.

India had signed a government-to-government deal with France in 2016 to buy 36 Rafale fighter jets at a cost of about the Rs 58,000-crore. The Congress has been demanding details of the deal, alleging that the deal negotiated under its rule was much cheaper than the contract signed by the Modi government.

On maritime security, the French President said both the countries will have "unprecedented" level of cooperation to ensure peace and stability in the Indian Ocean and Pacific.

He said space agencies of both countries will have joint monitoring mechanism for developments in the maritime sphere, while navies of the two nations will share intelligence and call their respective military bases for any requirement.

In his statement, PM Modi said that the strategic partnership between the two countries may be just 20-years-old, but the cultural and spiritual partnership was even older.

"The values of liberty, equality and fraternity echo not just in France but are also deeply enshrined in India's Constitution as well," the Prime Minister said.

Mr Macron also said effectively containing threats of terrorism and radicalisation are going to be key elements in the strategic cooperation between the two countries. He particularly also talked about threat of terrorism.

"The trust that we share is protecting us as our interests are aligned," said Mr Macron.

Promoted
Listen to the latest songs, only on JioSaavn.com
Another pact provides for a way forward for the implementation of the Jaitapur nuclear power project.