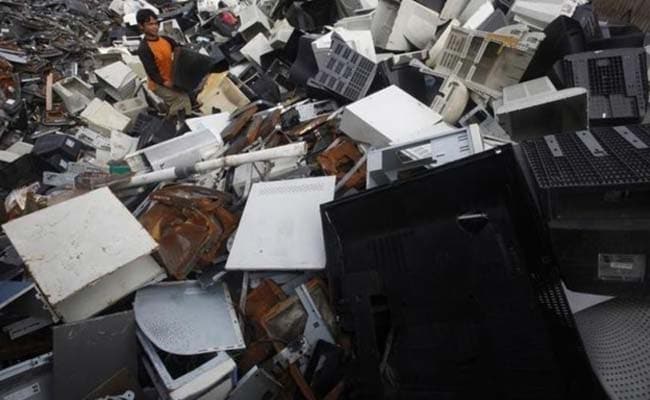 The top three Asian nations with the highest e-waste generation in absolute quantities are China, Japan and India.

United Nations: India is the fifth biggest producer of e-waste in the world, discarding 1.7 million tonnes (Mt) of electronic and electrical equipment in 2014, a UN report has said warning that the volume of global e-waste is likely to rise sharply by 21 per cent in next three years.

The 'Global E-Waste Monitor 2014', compiled by UN's think tank United Nations University (UNU), said at 32 per cent, the US and China produced the most e-waste overall in 2014. India came in fifth, behind the US, China, Japan and Germany, the report said.

The top per capita producers by far are the wealthy nations of northern and western Europe, the top five being Norway, Switzerland, Iceland, Denmark, and the UK.

In 2014, people worldwide discarded all but a small fraction of an estimated 41.8 Mt of electrical and electronic equipment -- mostly end-of-life kitchen, laundry and bathroom equipment like microwave ovens, washing machines and dishwashers.

The volume of e-waste is expected to rise by 21 per cent to 50 Mt in 2018, said the report, which details the location and composition of the world's fast-growing e-waste problem.

While only 7 per cent of e-waste last year was made up of mobile phones, calculators, personal computers, printers, and small information technology equipment, almost 60 per cent was a mix of large and small equipment used in homes and businesses, such as vacuum cleaners, toasters, electric shavers, video cameras, washing machines, electric stoves, mobile phones, calculators, personal computers, and lamps.

The 41.8 Mt weight of last year's e-waste is comparable to the distance from New York to Tokyo and back.

The report said less than one-sixth of last year's e-waste is thought to have been diverted from landfills to recycling and reuse.

The e-waste generated in 2014 contained an estimated 16,500 kilotons of iron, 1,900 kilotons of copper, 300 tonnes of gold (equal to 11 per cent of the world's total 2013 gold production), as well as silver, aluminium, palladium plastic and other resources with a combined estimated value of USD 52 billion.

Toxins in that e-waste include 2.2 Mt of lead glass, 0.3 Mt of batteries, as well as mercury, cadmium, chromium and 4,400 tonnes of ozone-depleting substances (CFCs).

Health problems associated with such toxins include impaired mental development, cancer, and damage to livers and kidneys, the report added.

The escalating global e-waste problem is driven by the rising sales and shortening life cycles of electrical and electronic equipment. "Worldwide, e-waste constitutes a valuable 'urban mine'-- a large potential reservoir of recyclable materials. At the same time, the hazardous content of e-waste constitutes a 'toxic mine' that must be managed with extreme care," said UN under-Secretary-General David Malone, Rector of UNU.

Promoted
Listen to the latest songs, only on JioSaavn.com
"The monitor provides a baseline for national policymakers, producers and the recycling industry, to plan take-back systems. It can also facilitate cooperation around controlling illegal trade, supporting necessary technology development and transfer, and assisting international organisations, governments and research institutes in their efforts as they develop appropriate countermeasures," he said.

"This will eventually lead to improved resource efficiency while reducing the environmental and health impacts of e-waste."