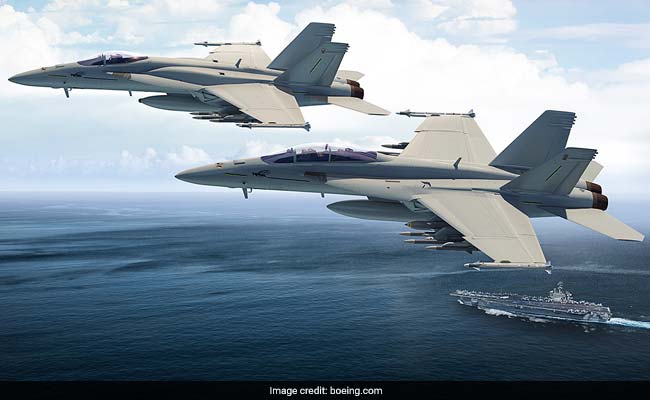 New Delhi: Boeing Co, considered the frontrunner in the race to supply the Indian navy with new fighter jets, is now in contention for a much bigger $15 billion order after the government abruptly asked the air force to consider the twin-engine planes.

Until recently, Lockheed Martin Corp's F-16 and Saab AB's Gripen were in a two-horse race to supply at least 100 single-engine jets to build up the Indian Air Force's fast-depleting combat fleet.

Both had offered to build the planes in India in collaboration with local companies as part of Prime Minister Narendra Modi's drive to build a domestic industrial base and cut back on arms imports.

But last month the government asked the air force to open up the competition to twin-engine aircraft and to evaluate Boeing's F/A-18 Super Hornet, a defence ministry source said. That jet is a finalist for the Indian navy's $8 billion to $9 billion contract for 57 fighters.

The defence ministry plans to within weeks issue a request for information or RFI, the first stage of a procurement process, for a fighter to be built in India. The competition will be open to both single and twin-engine jets, the official said, but both Lockheed and Saab said they had not been informed about the new requirements.

The latest change of heart is a major opportunity for Boeing, whose only foreign Super Hornet customer so far is the Royal Australian Air Force.

It also illustrates how dysfunctional the weapons procurement process and arms industry are in India. The need for new fighters has been known for nearly 15 years, but after many announcements, twists and turns, the country's air force has only three-quarters of the aircraft it needs.

An indigenous light combat aircraft, the Tejas, is still not operational, 35 years after it was first proposed.

An Indian Air Force source said fighter procurement was urgent: the branch's operational strength has fallen to just 33 squadrons, its weakest level in four decades, as it decommissions Soviet-era MiG-21s.

"The IAF wants the RFI issued within weeks and get the process started," said the source, who declined to be identified because he was not authorised to speak to the media. "The problem is that government keeps shifting what it wants."

Over the next decade, 13 more squadrons will be retired as their aircraft age out of service, parliament's standing committee on defence said in a December report.

The defence ministry declined to comment on the air force's aircraft modernisation programme, saying it was not in a position to do so.

Lockheed, which had offered to shift its F-16 production line in Fort Worth, Texas, to India, said it had not been told of any change to the Indian plan for single-engine fighters.

"Our proposed F-16 partnership with India stands firm," the company said in an email. Last year it picked Tata Advanced Systems as its local partner and said it was in talks with dozens of firms to build up the supplier network.

"The Government of India has not yet issued formal requirements but we are continuing to support government-to-government discussions and engage with Indian companies about F-16 industrial opportunities," Lockheed said.

"We have seen the reports in the Indian media, but no new formal communication has been made to us regarding the fighter programme," said Rob Hewson, Saab Asia Pacific's head of communications.

An order the size of India's is rare. The only comparable opportunity for the Super Hornet is Canada's request for 88 fighters, which could be worth as much as $14.6 billion.

The Indian air force competition has echoes of a 2007 tender for 126 medium multi-role combat aircraft, which the Rafale won. But negotiations quickly bogged down over local production and prices, and in the end, the government ordered just 36 of the planes in 2016 for $8.7 billion.

The air force ideally would like a combination of lighter single-engine and twin-engine jets, as well as stealthy aircraft, but cannot afford such a range of foreign systems, analysts said.

A twin-engine foreign fighter would perhaps offer the best value while the Tejas finishes development, they said.

India's annual defence capital procurement budget of $14 billion to $15 billion has to be spread over the army, navy, air force and the indigenous defence research organisation.

"The operational costs are going up with increased manpower, higher wages and general inflation. Ministry of Defence doesn't have the luxury to go for too many platforms despite the rapidly falling squadron strength of the air force," said Amber Dubey, partner and India head of aerospace and defence at global consultancy KPMG.

Boeing India President Pratyush Kumar said the company was ready to respond to any request from the air force.

"We will follow the Ministry of Defence's lead on their process and will be responsive to their needs if we are asked to provide any information," he said.

Mr Kumar said Boeing was committed to building the planes in India and had offered to help with India's plans to develop its own advanced medium combat aircraft.

Promoted
Listen to the latest songs, only on JioSaavn.com
But the experience with the Rafale contract has made experts sceptical that the latest tender will proceed as planned.

Richard A. Bitzinger, visiting senior fellow at Singapore's S.Rajaratnam School of International Studies, said he did not expect a resolution in even the next two to three years.
© Thomson Reuters 2018